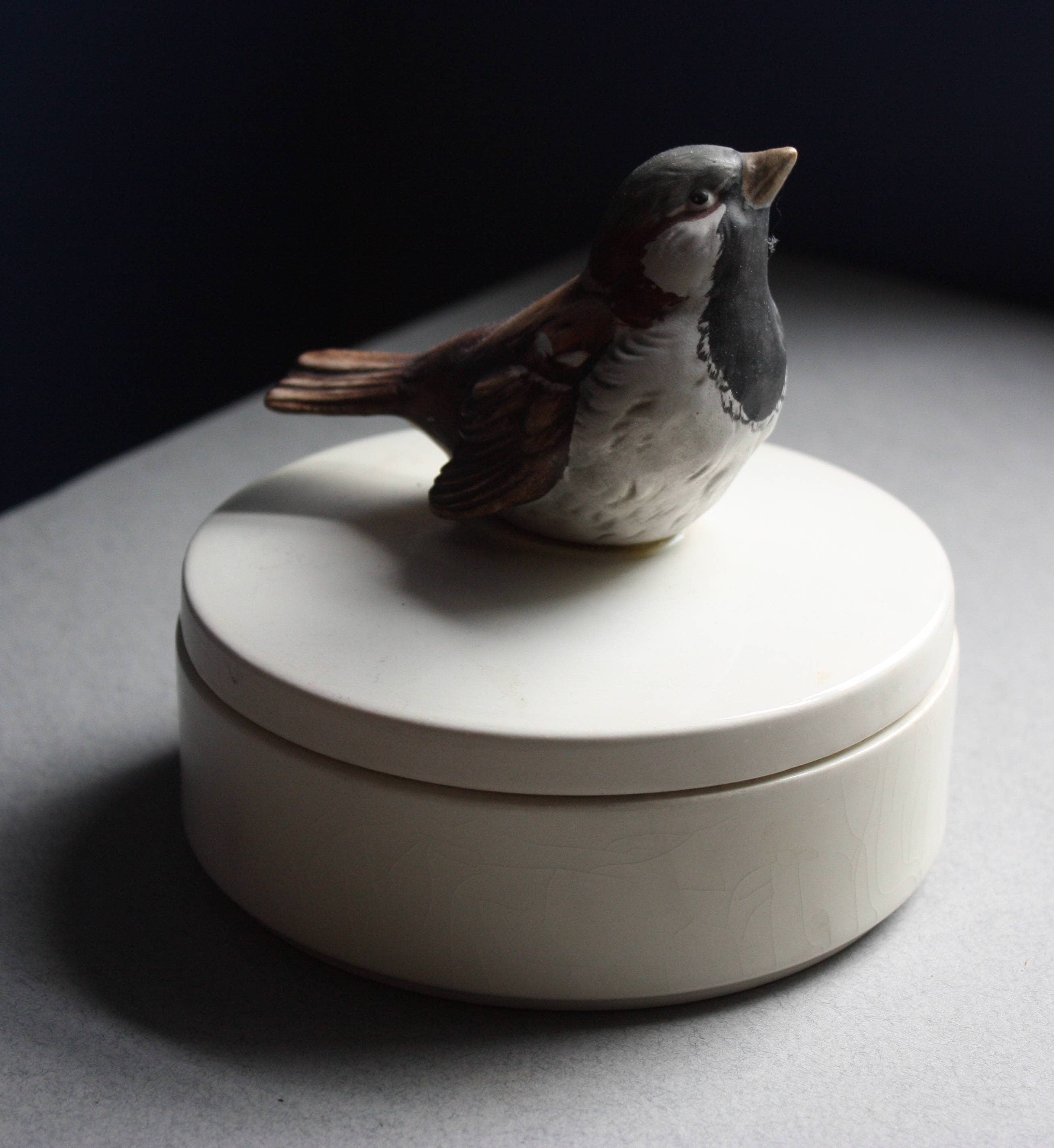 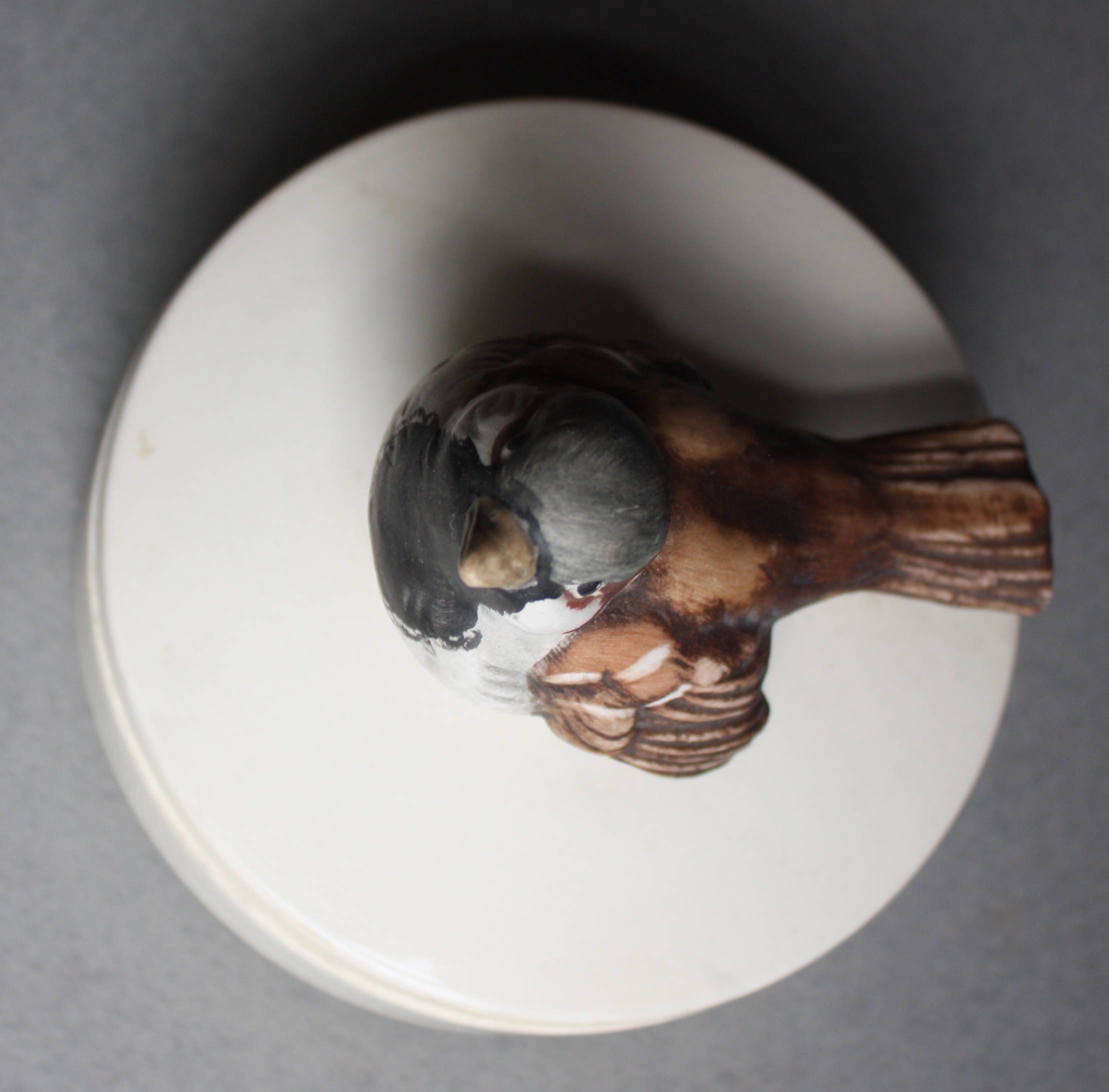 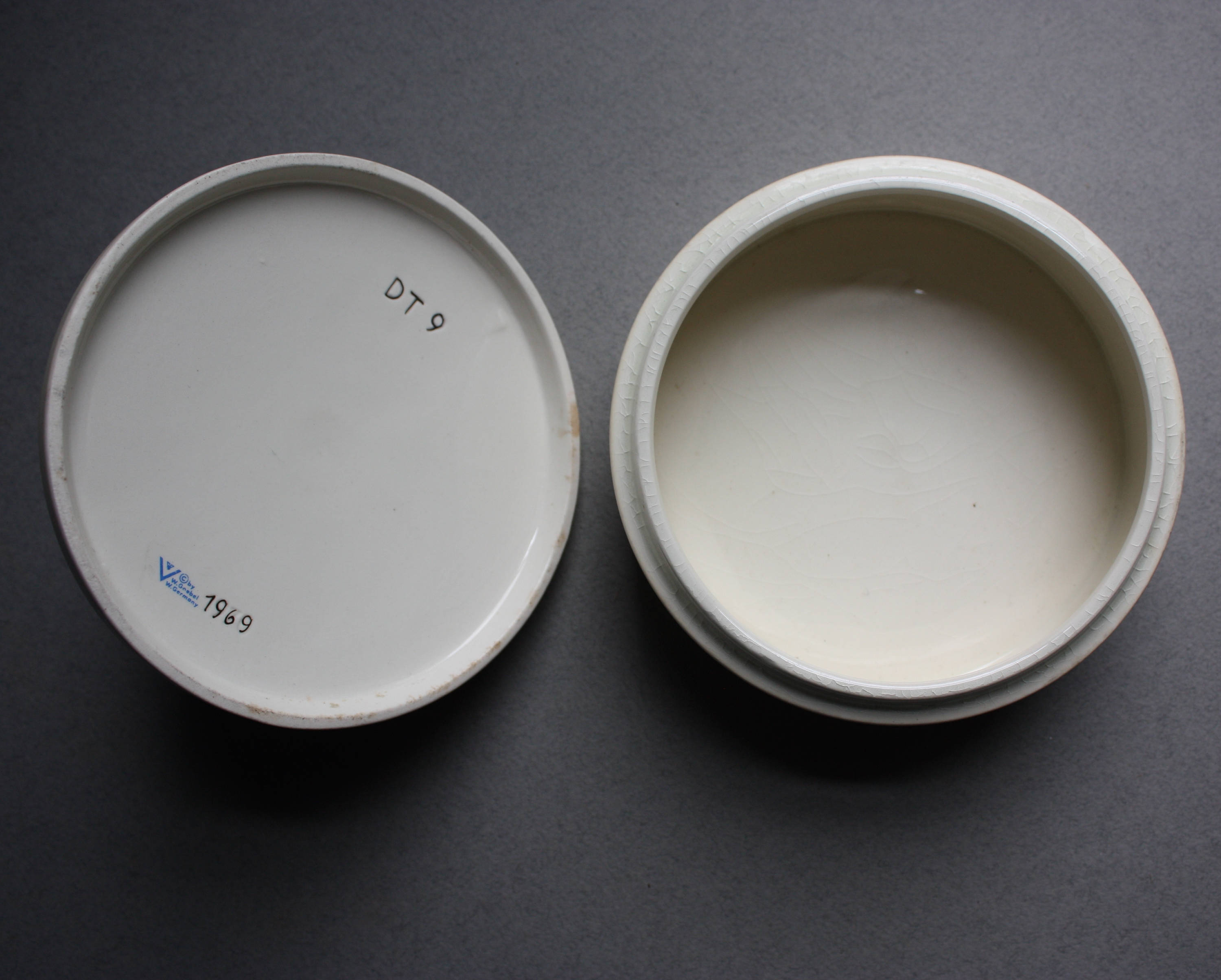 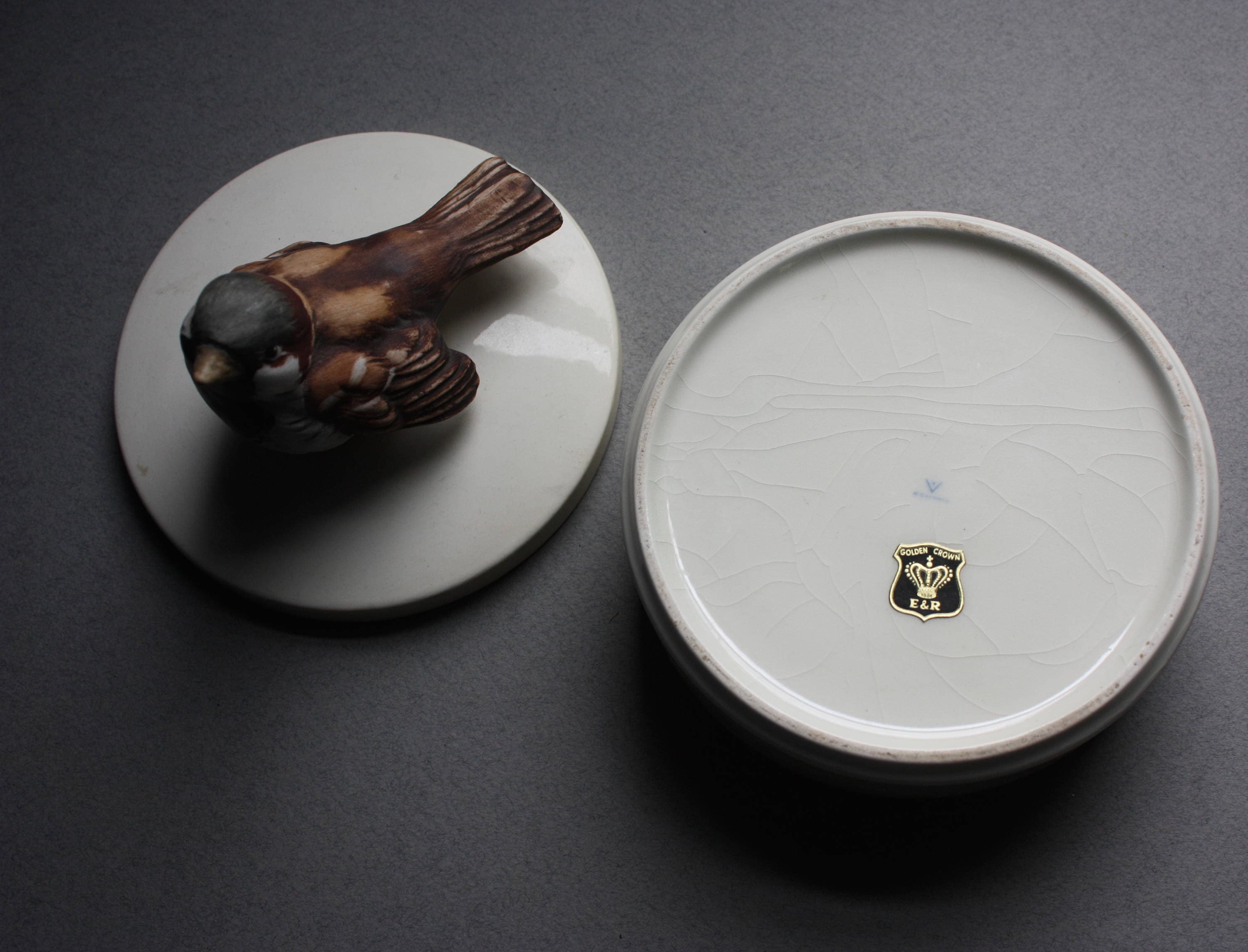 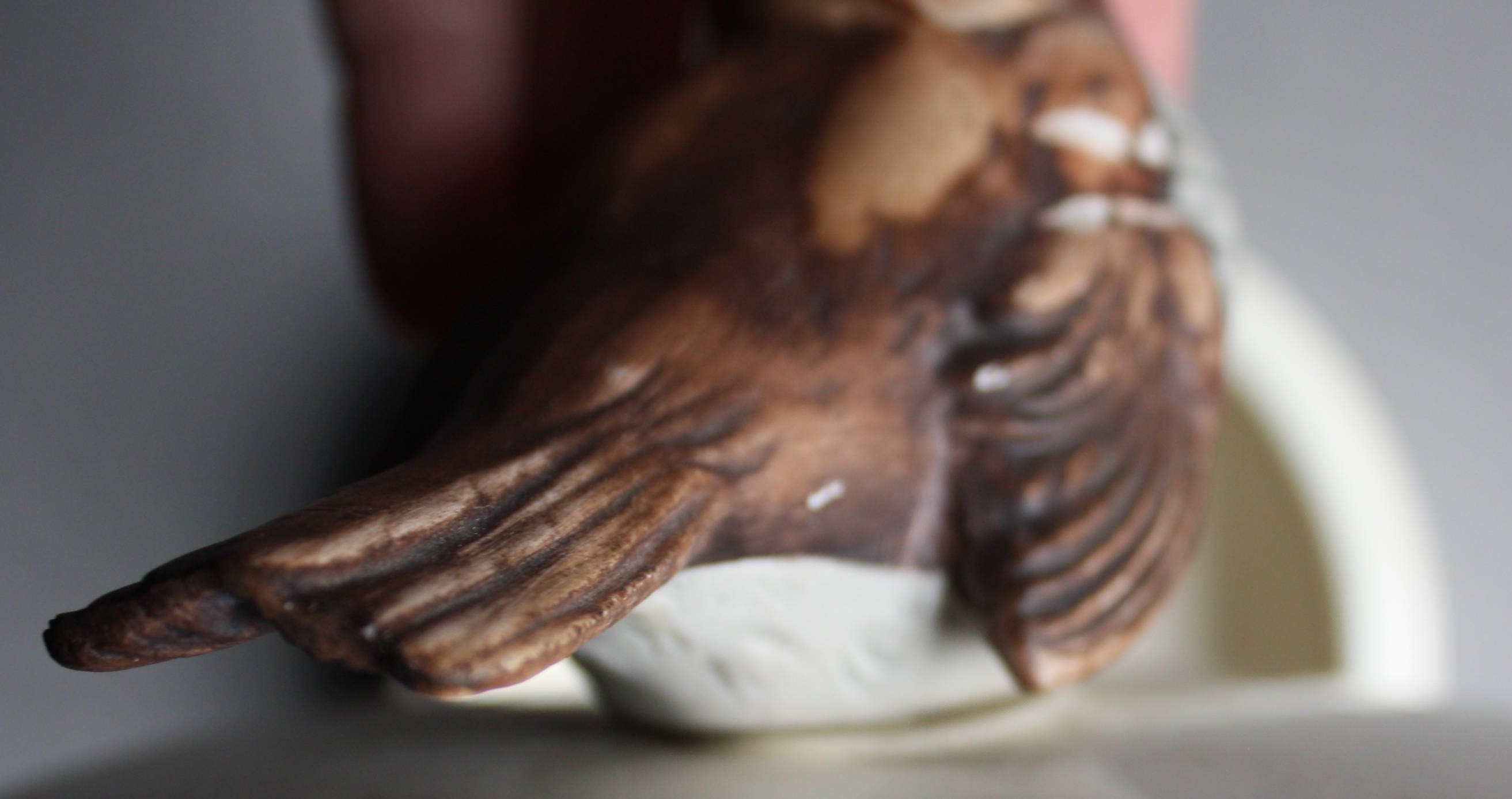 Hummel by Goebel Candy Box with Sparrow, Made in West Germany, 1969

This Hummel by Goebel candy box topped with a sparrow is dated 1969 and bears the Hummel bee ("Hummel" means "bee" in German!) inside a V, which represents "verkaufsgesellschat" or distribution company.

The style of the bee inside the V determines the age of the pieces, so if this piece weren't marked with a date, it would be considered as being from the time period between 1960-1972. This bee mark is called the "Stylized Bee" and with the Three Line mark is known as TMK-4 as opposed to TMK-3 without the three lines.

The inside of the lid has the TMK-4 mark, the date 1969, and a letter number combination of DT 9 while the bottom of the box has the TMK-3 mark with the E & R "Golden Crown" shield sticker depicting a crown. This sticker, on the bottom of the dish portion, stands for Ebeling and Reuss, who were suppliers of porcelain wares to the Northeastern US. They imported porcelain from many different companies.

The dimensions are 5" across the bottom of the box and 4" across the opening of the box. The sparrow is 4 ⅝" from the wing to the beak. The depth of the box is approximately 1 ½".

There is considerable crazing on the bottom bowl portion of the box. Also, there is missing paint on the sparrow as seen in the fifth photo. Please examine the photos and do let me know if you'd like more as I'll be happy to oblige.