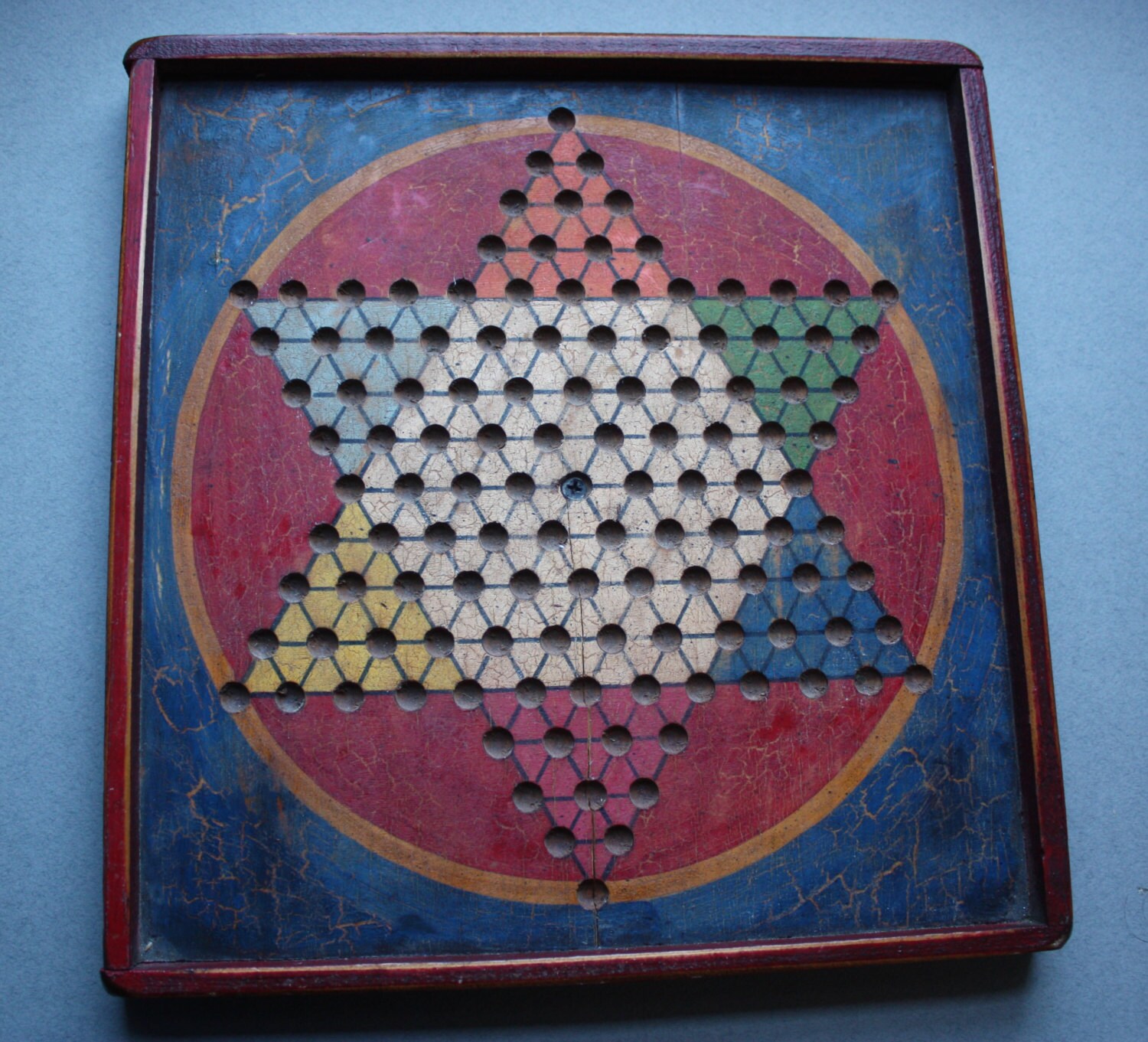 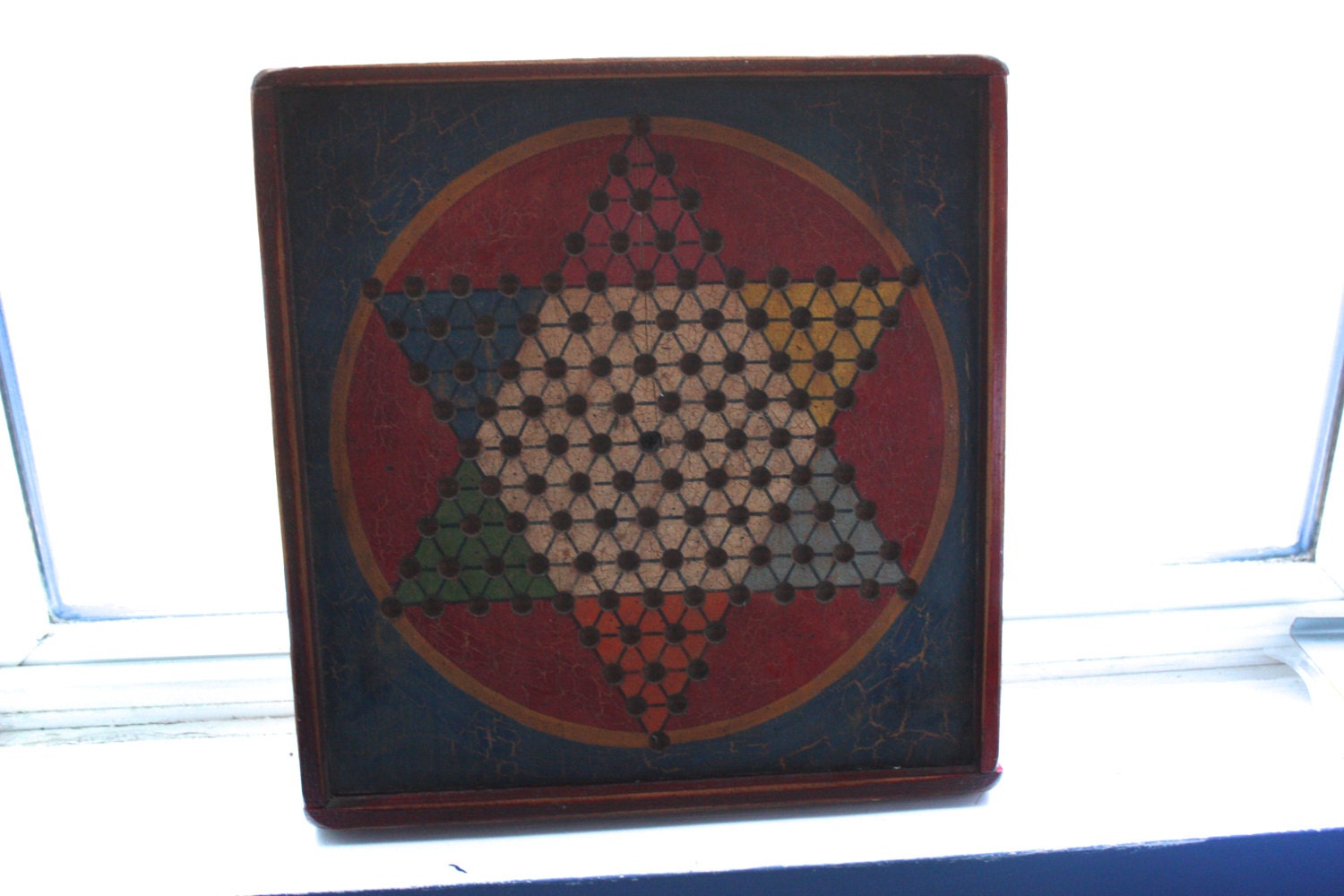 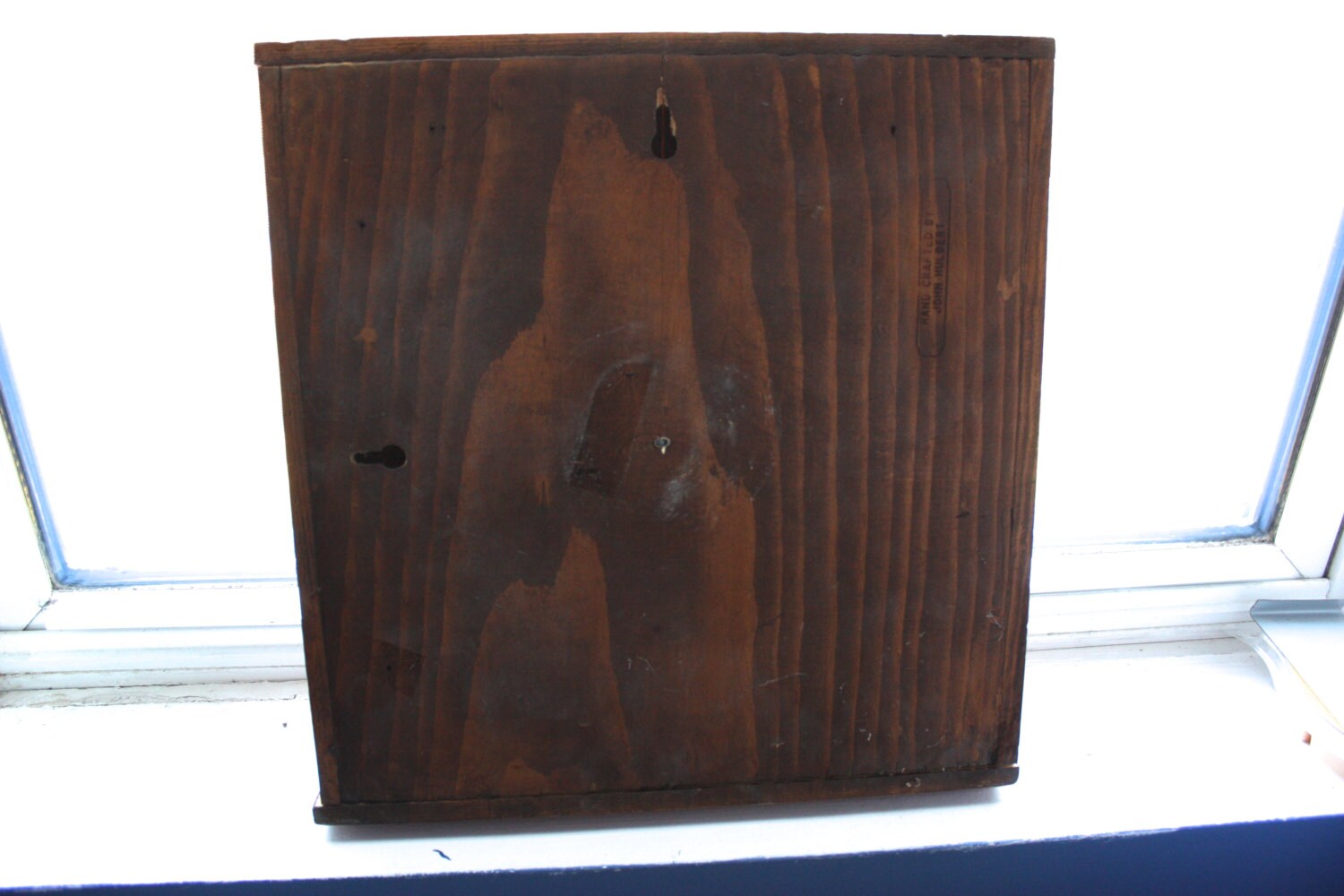 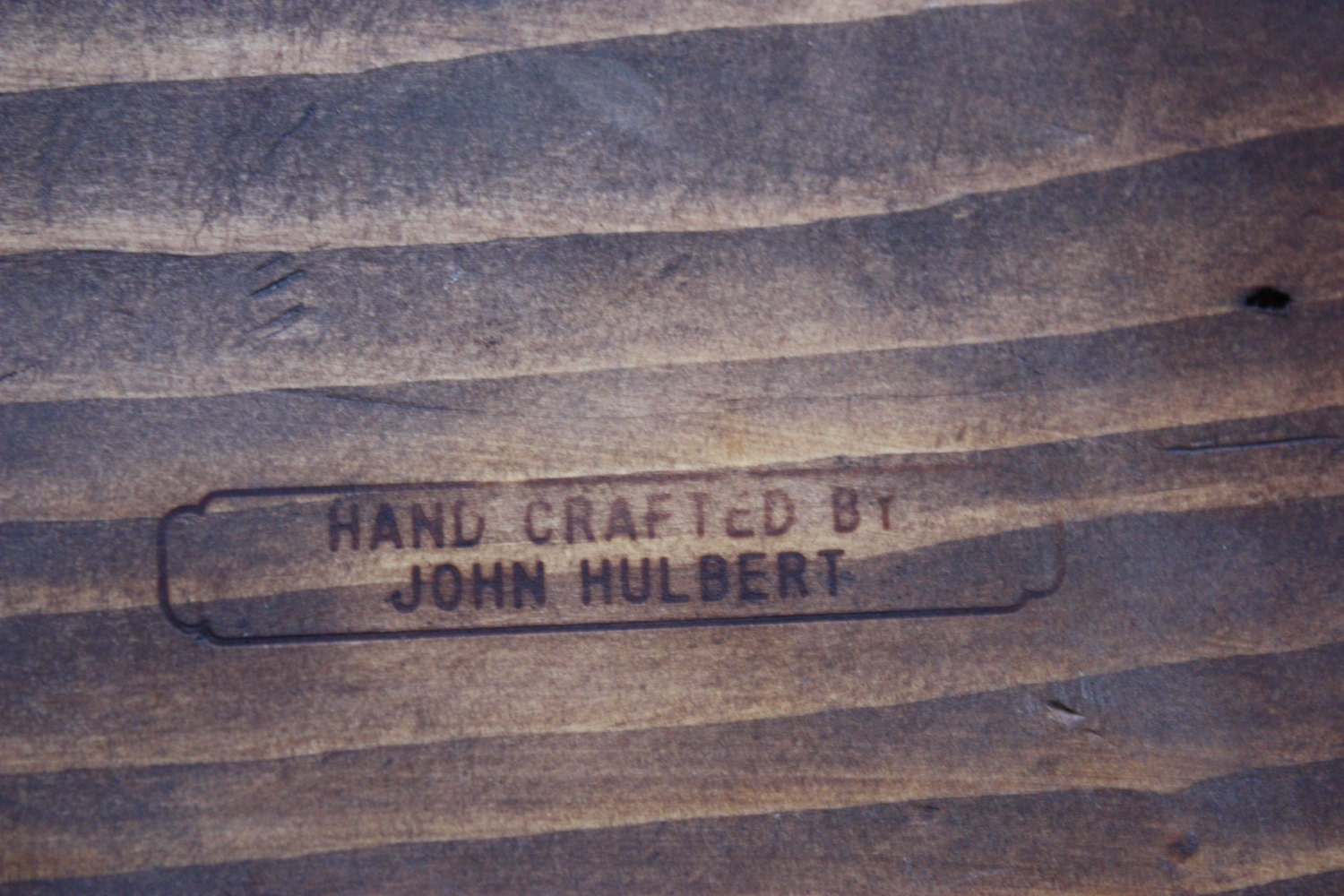 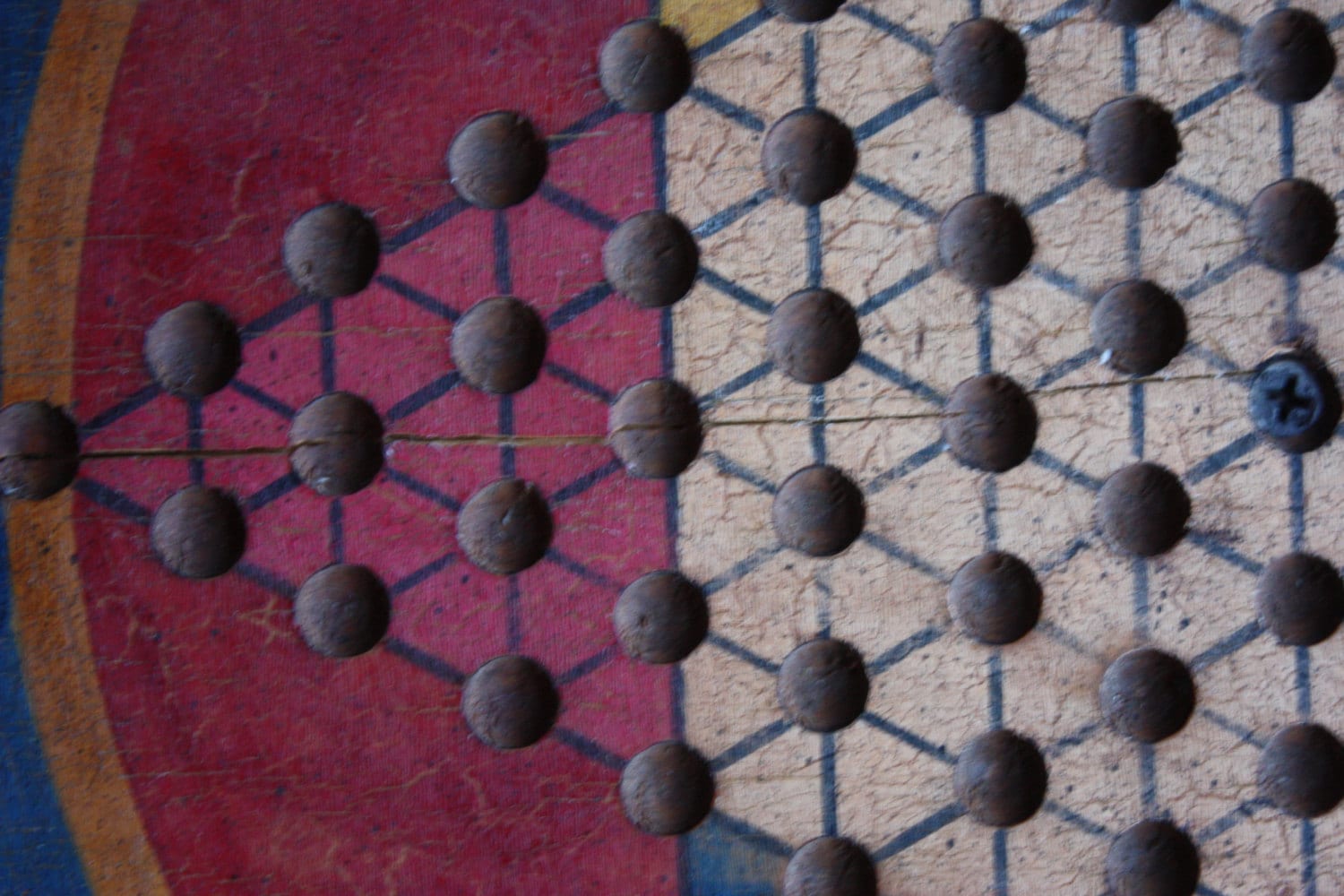 **The description has been changed to reflect corrected information I received from a professional regarding this piece.

This much sought after piece of Americana folk art is probably late 20th century (possibly mid-1970s-1990s) and crafted by John Hulbert (1923-2013) as the back attests to. This piece has applied edge trim with brad nails/finishing nails used to secure the trim. There are two drilled keyhole hangers on the back.

The board has a crackle appearance and a split in the wood, intentionally made by the artist. One edge of the applied trim overhangs the piece.

In my research, I found an obituary for a John Hulbert, who was interested in colonial crafts with game boards being one facet. It is my opinion that this is the same John Hulbert who made this game board. The obituary reads:

Born in London, John came to America as a young British seaman aboard a Furness Lines cruise ship. Assigned to fulfill his contractual duties as a crewmember on the " MS Queen of Bermuda" , he sailed weekly from New York to Bermuda. On leaving the British Merchant Marines, he traveled to Canada to attend the University of British Columbia. Ultimately, he returned to the States ,
became a citizen and served in the U S Army. During the course of his life, he was a member of KIWANIS and MENSA.

His love of travel led him to pursue a career as a travel agent, which provided countless opportunities to experience the many cultures of the world John was an avid reader and was particularly fascinated with life in early America. His interests focused on colonial crafts such as Furniture Making, Fractur, Tole and Game boards. He mastered the art of Tinsmithing and his antiqued reproductions are still sought after collectibles. He researched and contributed to the publishing of "Tools and Trades " while on staff at the Mercer Museum.

Please do let me know if you require more information or more photographs.

Shipping will be insured.