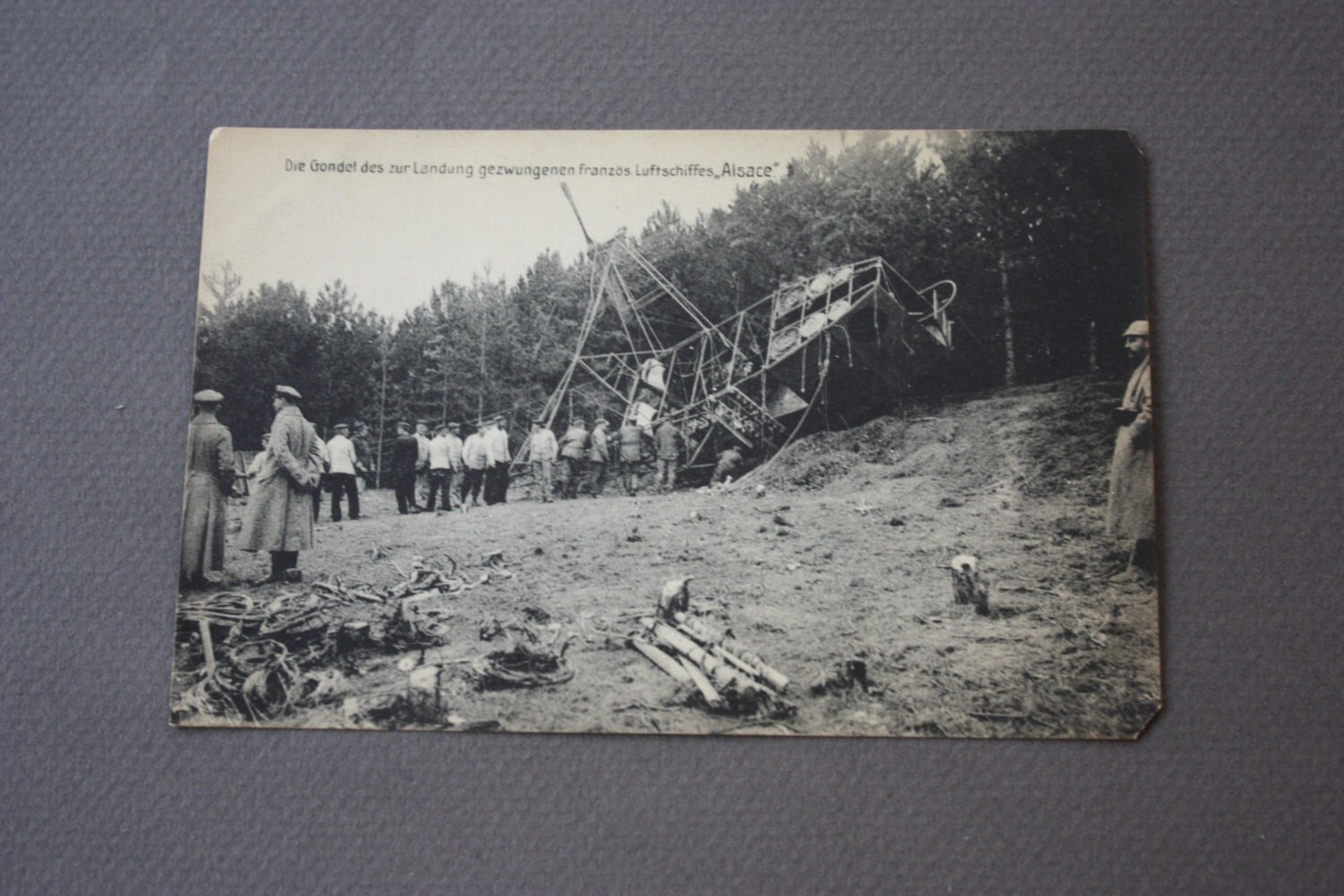 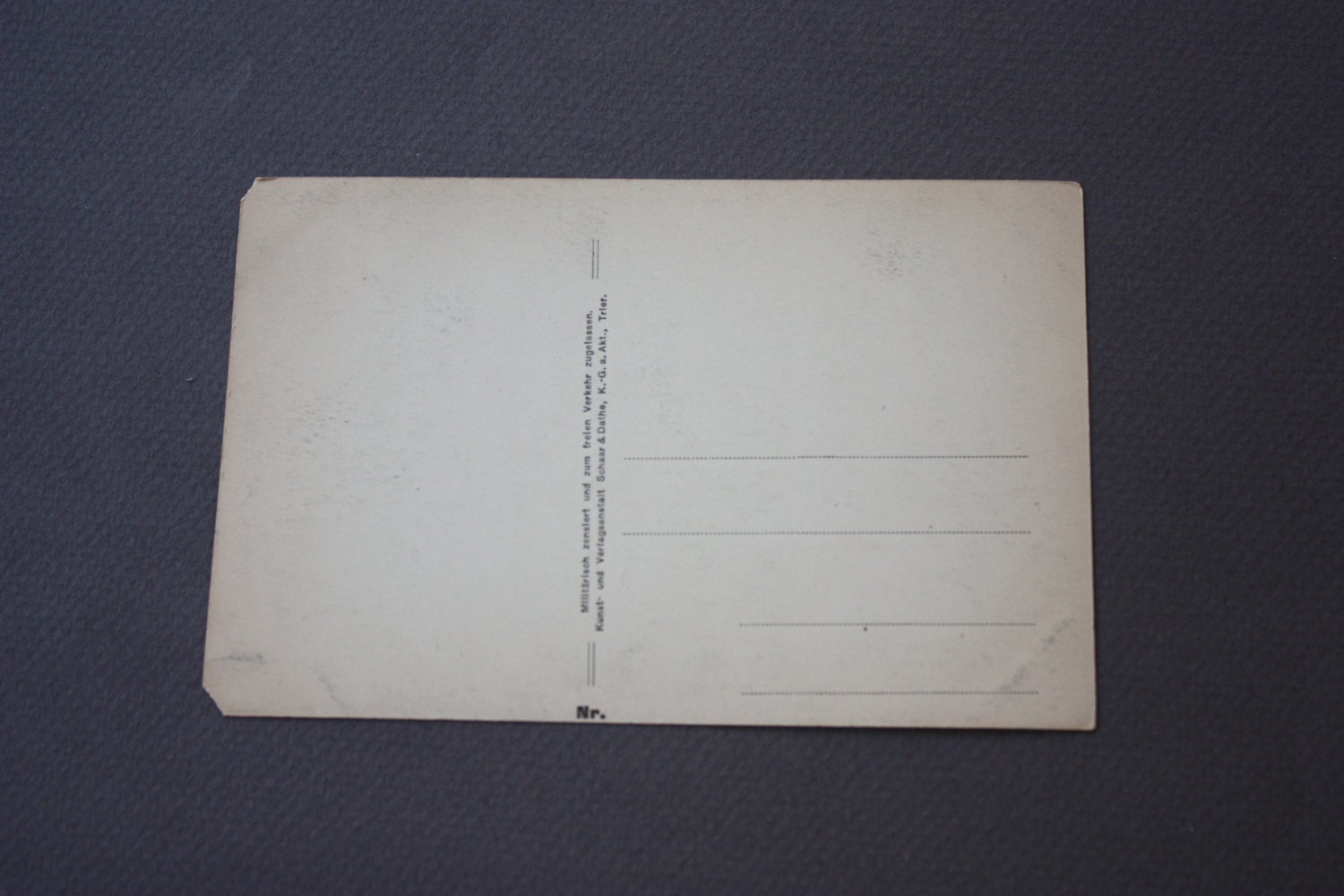 Please note overall edge wear and a small snip from the upper right hand corner of the postcard.

The front of this historical photographic postcard depicts German troops in the foreground of the area where the French airship Alsace was shot down. Many thanks to http://www.earlyaeroplanes.com/archive/airships01/Das-Ende-der-Alsace_Fliegerrevue-Taeger-english.pdf for the following valuable information on the Alsace:

As of September 1915 the new “Alsace” supported the French army in the autumn battle of Champagne. In the evening of 1 October 1915 a message noted: “Our dirigible airship, ‘Alsace’ bombarded during the night of 30 September 1915 the junction of Amagne-Lycquy, the railway of Attigny, and the railway station of Vouziers. It was fired at all along its route, particularly at Vouziers, where it was surrounded with bursting incendiary shells. The airship returned safely to its base after fulfilling its mission. It was struck by some fragments of shells, which did no real damage.”

The last voyage of the “Alsace”
To counter the threat of enemy free-, captive- and motor-balloons, Germany had worked for ten years on the development of high-performance anti-balloon guns (BAK). The term Flugabwehrkanonen (Flak) [anti-aircraft guns] did not become an official term until 1916. Initially, even senior officers brought only a little understanding of the difficulties and problems of the new weapon. This was also true of Generaloberst Karl v. Einem - known as von Rothmaler - commander of the 3rd Army in Champagne. On 25 August 1915 the General became furious and threatened the staff officer of the balloon guns to stop the supply with ammunition because of his miserable firing. The latter was under extreme pressure to succeed and had to find ways to improve the interaction between the stationary and the few mobile guns.

On 2 October 1915 the “Alsace” took off for another night mission in support of the French offensive. At 2200 hours the airship was seen driving northward by German troops at Aubèrive. Hauptmann Simon led BAK-Zug 31, stationed at St. Souplet, shelling the airship on its entire route from Aubèrive to St. Hilaire-le-Petit. There, the airship came into view of a naval BAK-Zug [anti-balloon gun section]. The “Alsace” approached it from the southwest and then changed course to the west. The Marine gunners waited for a new target acquisition for some time and suddenly the airship was directly above them. Because of the limited vertical angle of fire, the shooting was still not started. Before the “Alsace” left the blind spot of the BAK-Zug, she turned to a northerly course. Now only the two naval guns fired in a northeasterly direction, following the course of the airship.

Meanwhile, the armoured car BAK 13 K under Leutnant Vogeler drove to the southern edge of the village of Hauviné and there had a position on it. The airship approaching from the south was to be seen very clearly in spite of the now pitch-dark night. In turn the “Alsace” drove into the blind spot of the BAK before it was ready to fire. The crew of BAK 13 K observed now a sharp change of course of the airship to the northwest. The gun opened fire, first southeastward, then – following the travel of the target – in a northeasterly direction. In the meantime, on the road southwest of St. Etienne-à-Arnes was positioned a second mobile artillery unit, the BAK 17 K of Leutnant Syffert. Meanwhile, the men saw how the “Alsace”, already under fire once located, approached from the south and drove on in the direction of St. Clement-St. Pierre. BAK 17 K fired at first to southwest and last directly to the west – a total of 33 grenades.

The French airship was caught in a trap. It had taken the most dangerous course along the two BAK- Züge [plural of BAK-Zug] and drove between the firing positions of the two artillery armoured cars. It dropped its bombs aimlessly. At 2230 “Alsace” was seen above Perthes-le-Châtelet heading towards Rethel. Ten minutes later she was again sighted over Perthes-le-Châtelet, but this time at a much lower height. Oberstabsarzt Overmann, the local commander of Perthes, immediately ordered a pursuit. Three Frenchmen, the first an officer, jumped from the low floating “Alsace” in order to make the ship lighter.
As Overmann arrived near the tunnel guard station north of Perthes, the three men had already been captured. Lieutenant Maurice Cohen, who had jumped first, had broken his spine and could not be saved by the German doctors.

Soon the airship fell two kilometers west-southwest of Perthes-le-Châtelet, into a small forest about 200 meters south of the road running from Tagnon to Perthes. Another five crew members, including three officers, jumped unhurt from the gondola and wandered about all night. It took till 7:30 in the morning on 3 October 1915, until they could all be captured. So far in addition to Cohen, is only one other pilot of the “Alsace” known by name. An officer named Raymond Bollack...is said to have succeeded in escaping after a short imprisonment in Germany.

On 20 October 1915 General von Einem decided that all four BAK units should receive equal credit for the victory. The “Alsace” was the first airship to fall victim to the German air defense, but not the last

The back of the card carries information about the publisher, Schaar and Dathe and also the phrase: Military censored and approved for home use.

Thank you also to http://www.metropostcard.com/publisherss1.html for their information on the German publisher who published between 1895 and 1934. Metro Postcards writes: This large printing house produced a variety of printed matter in lithography, letterpress, but especially collotype. By 1900 they were also producing postcards. As they grew they opened additional offices in Milan and Naples. When hard economic times hit they reorganized their business as Schaar & Dathe, Ernst Klein AG, but they still were forced to close within a year.