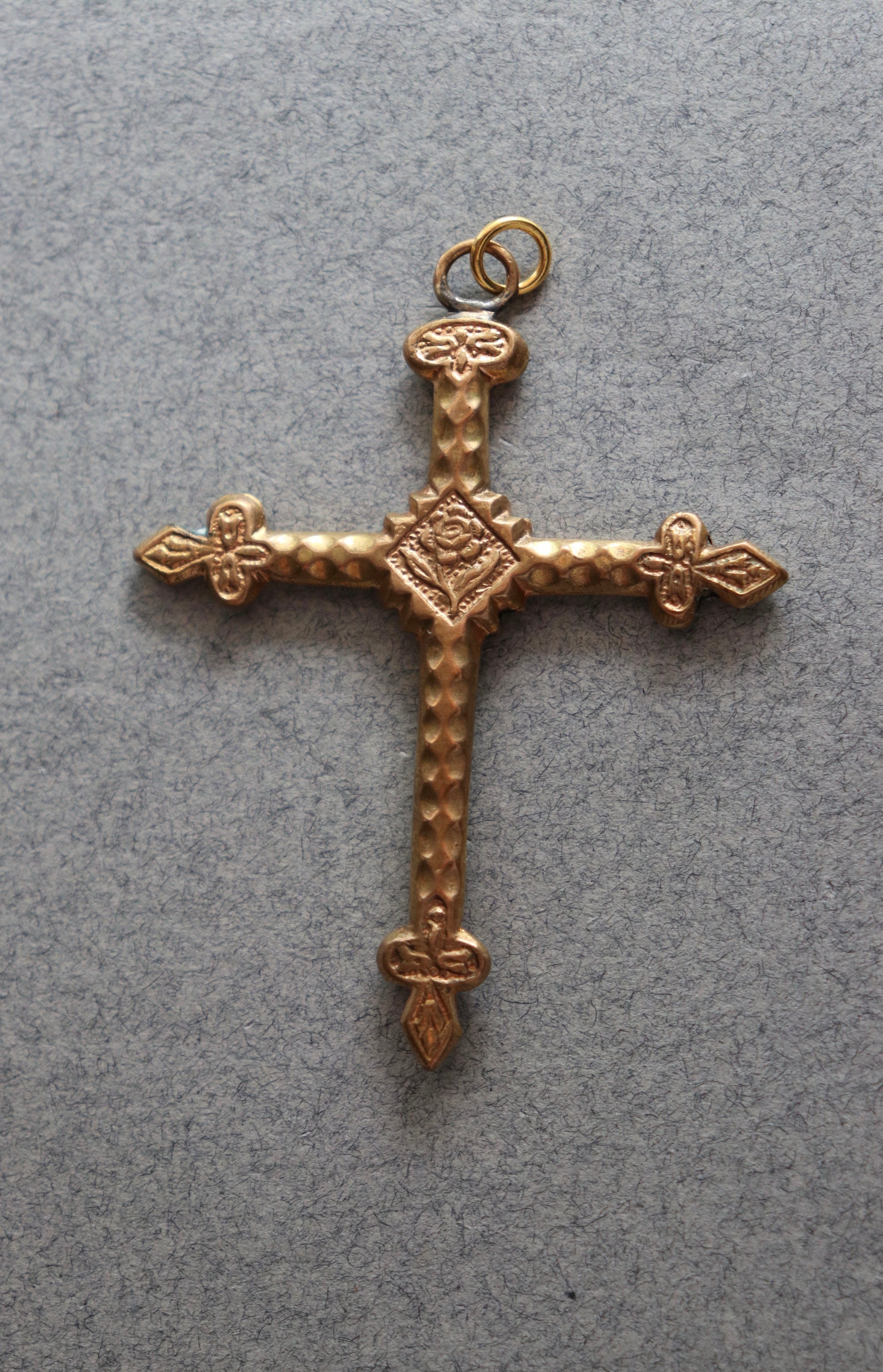 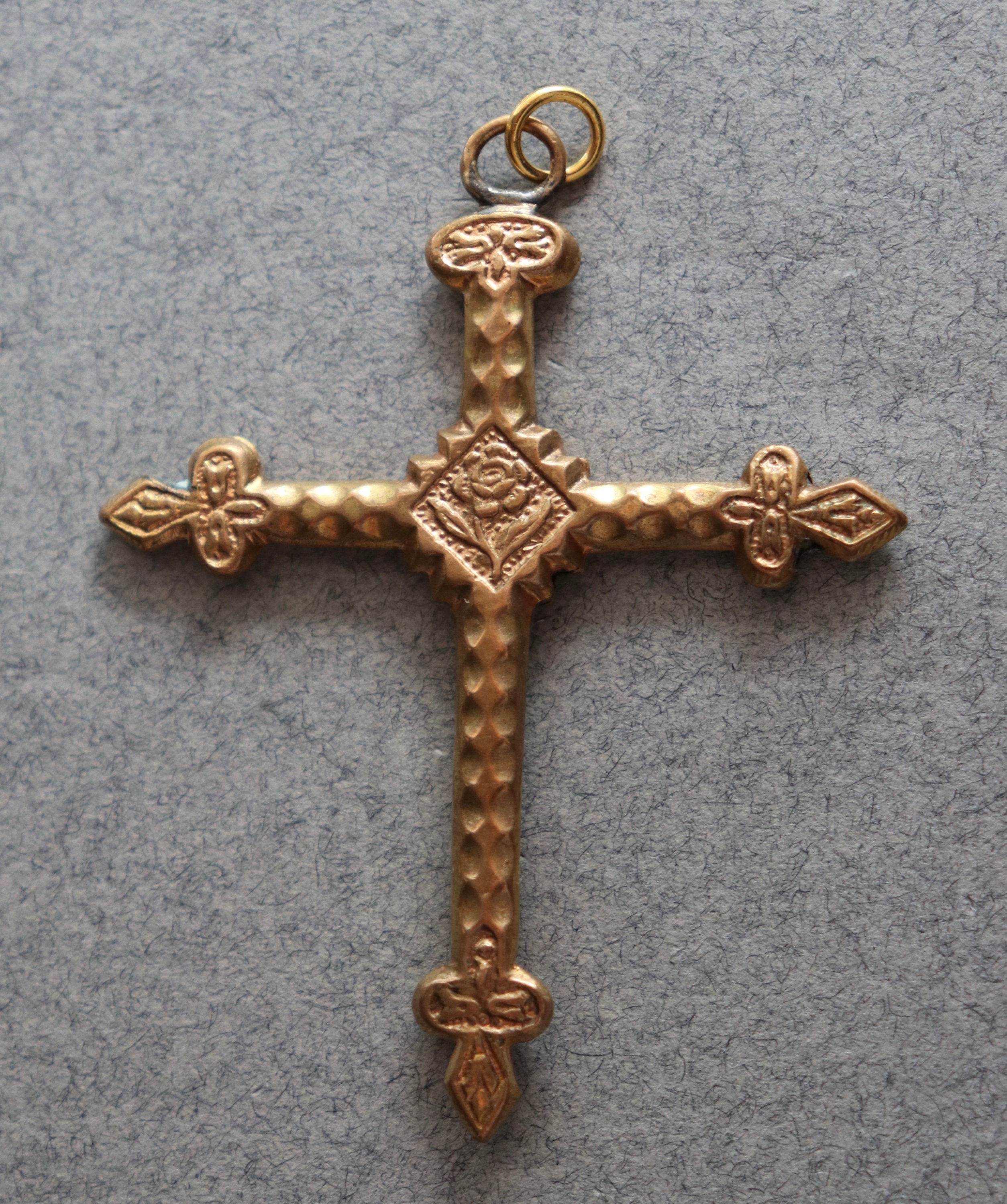 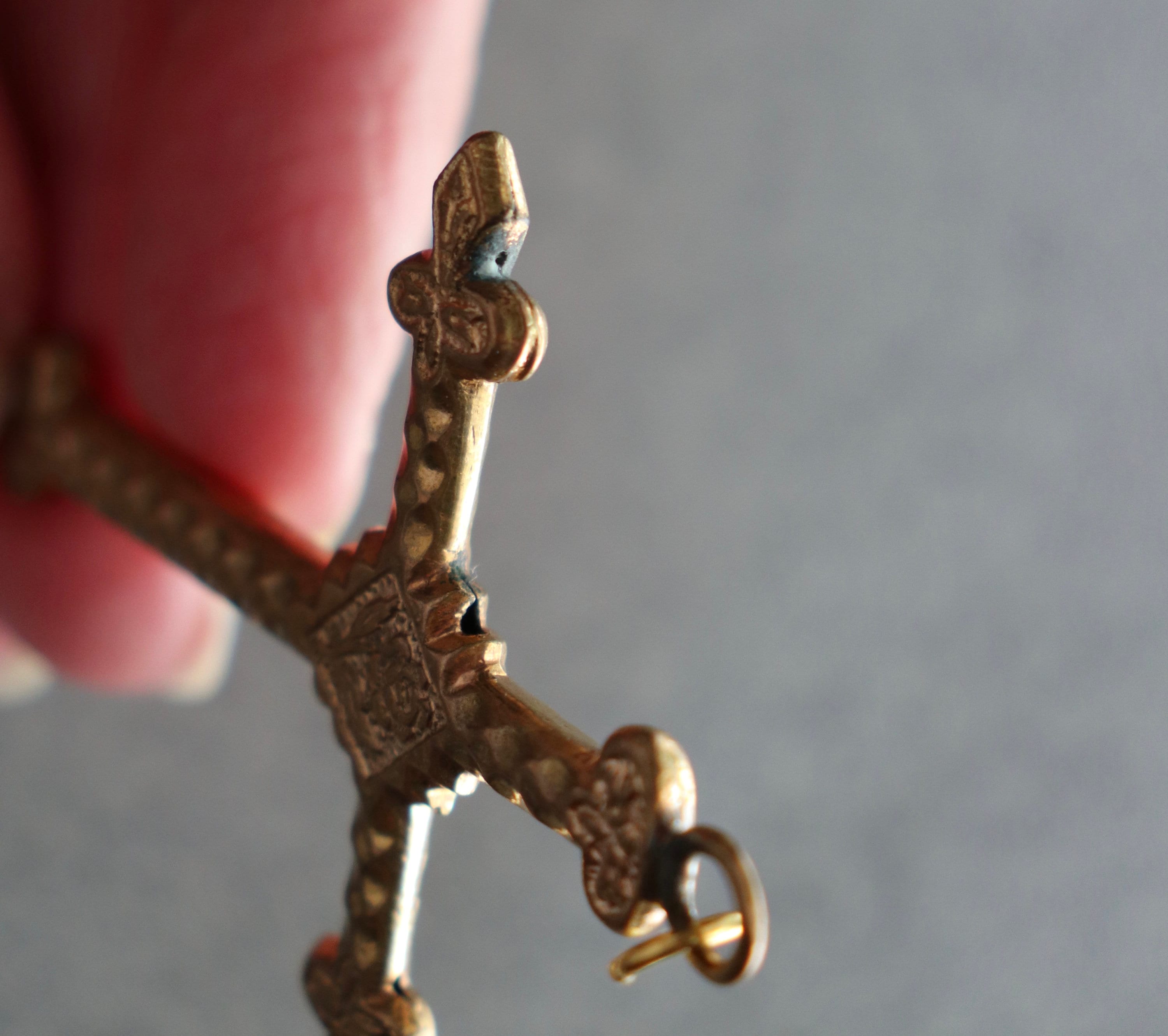 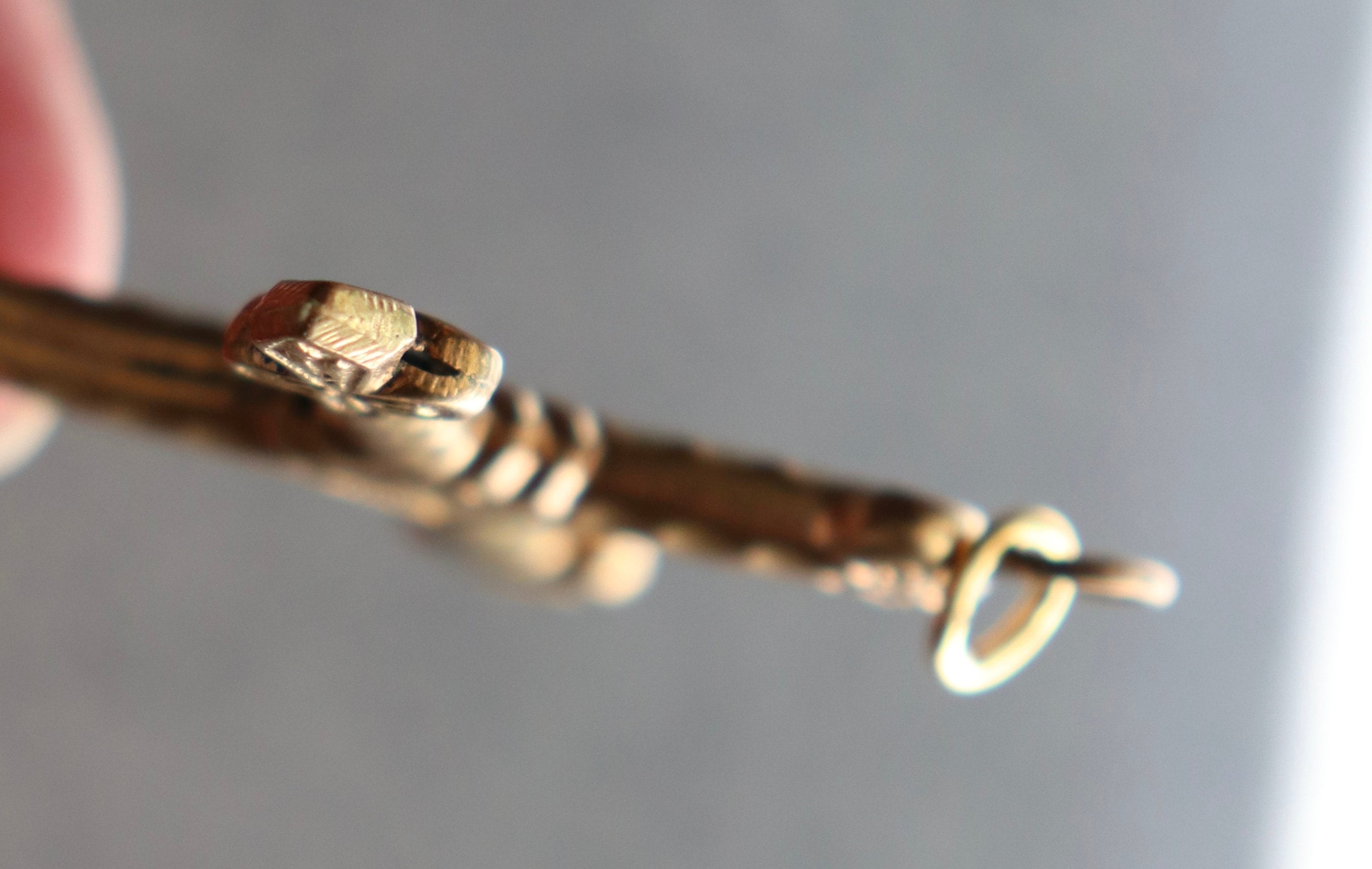 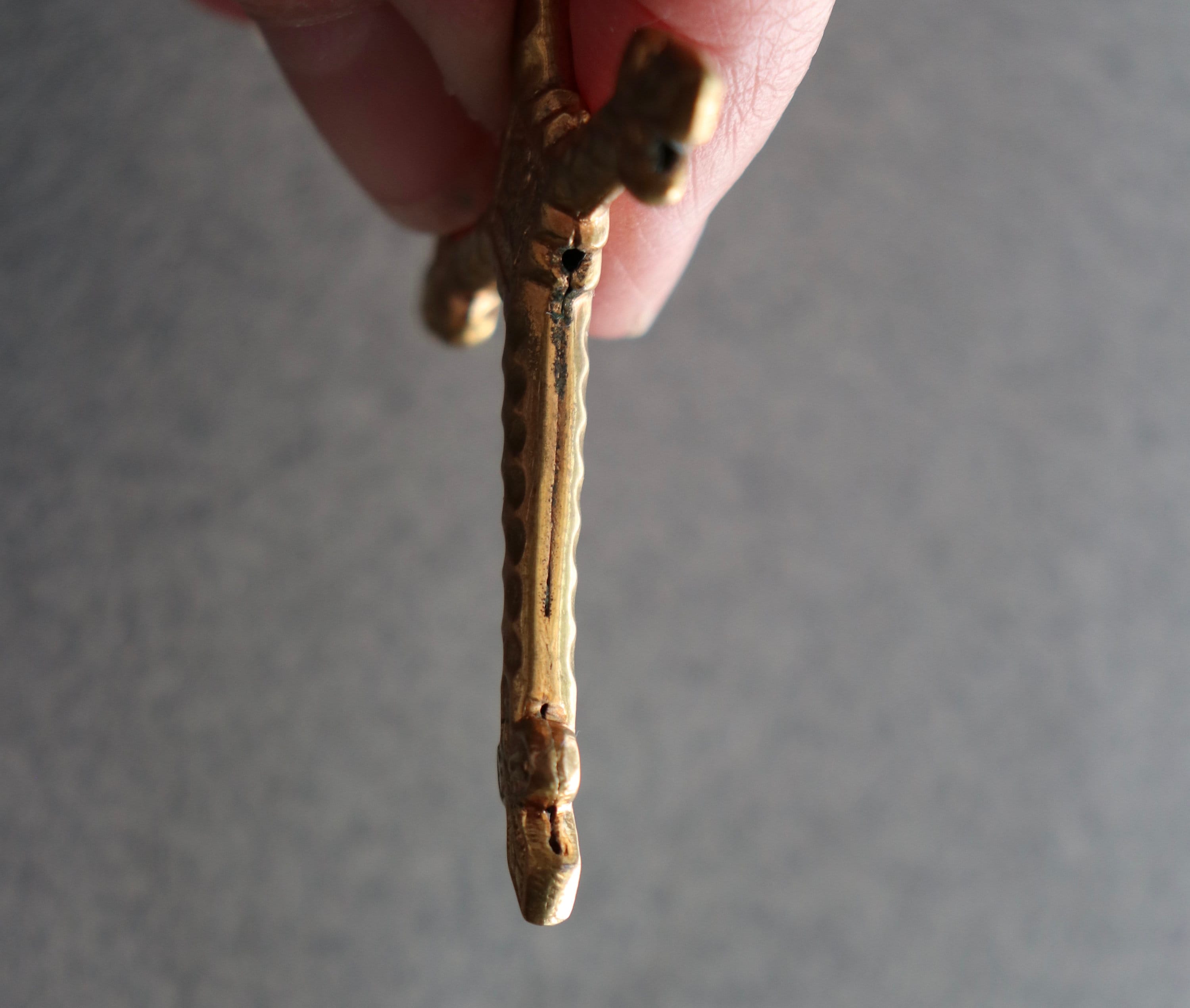 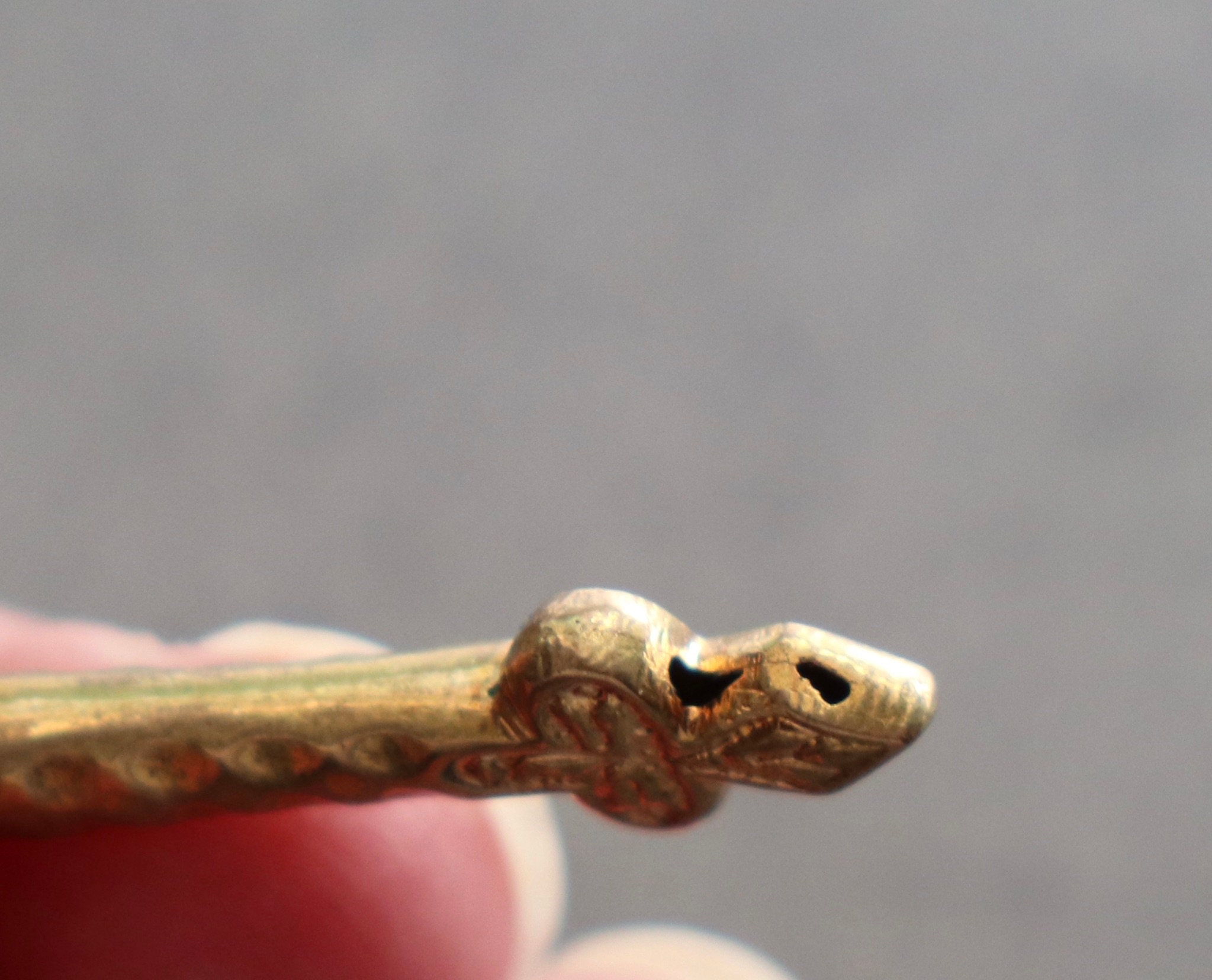 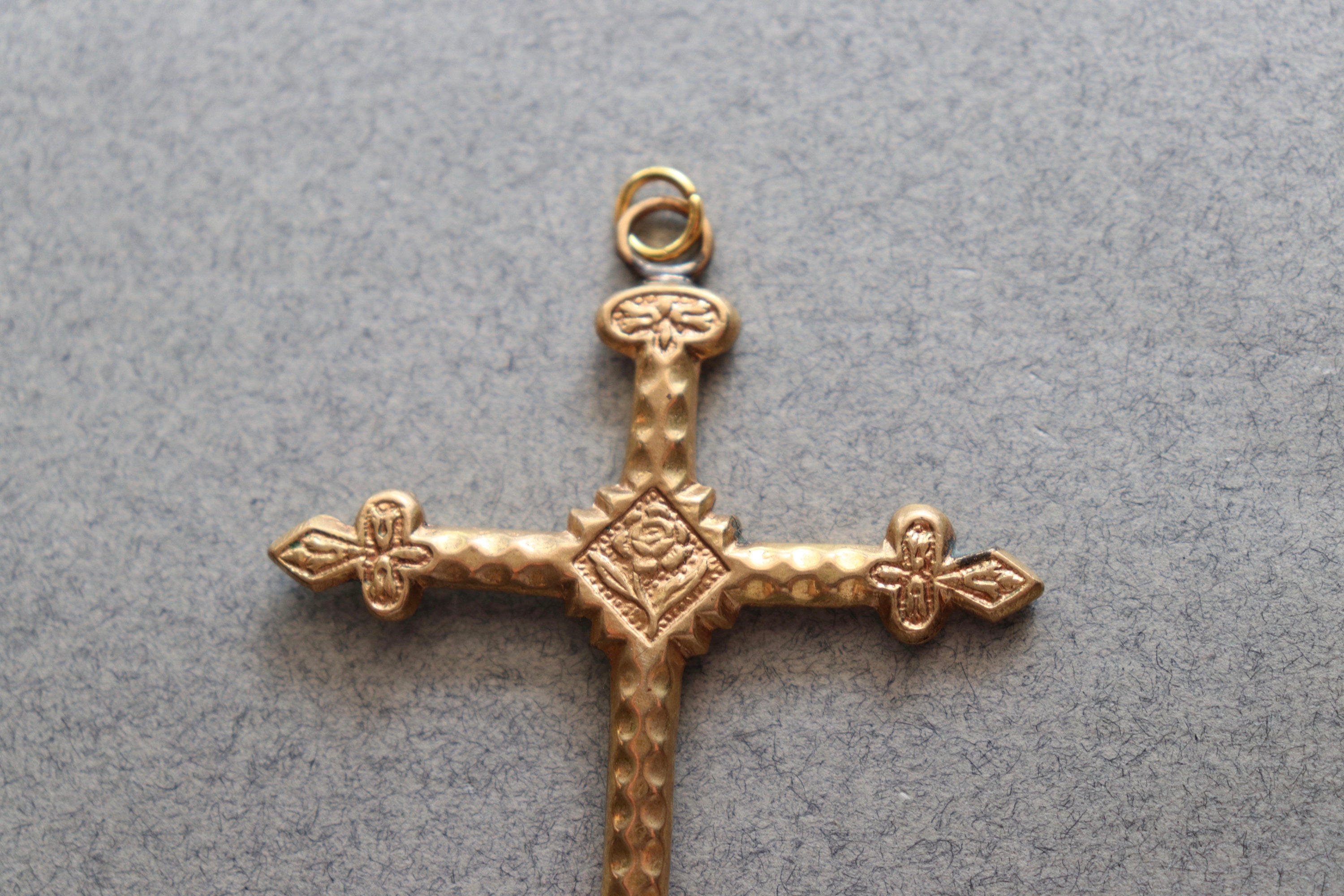 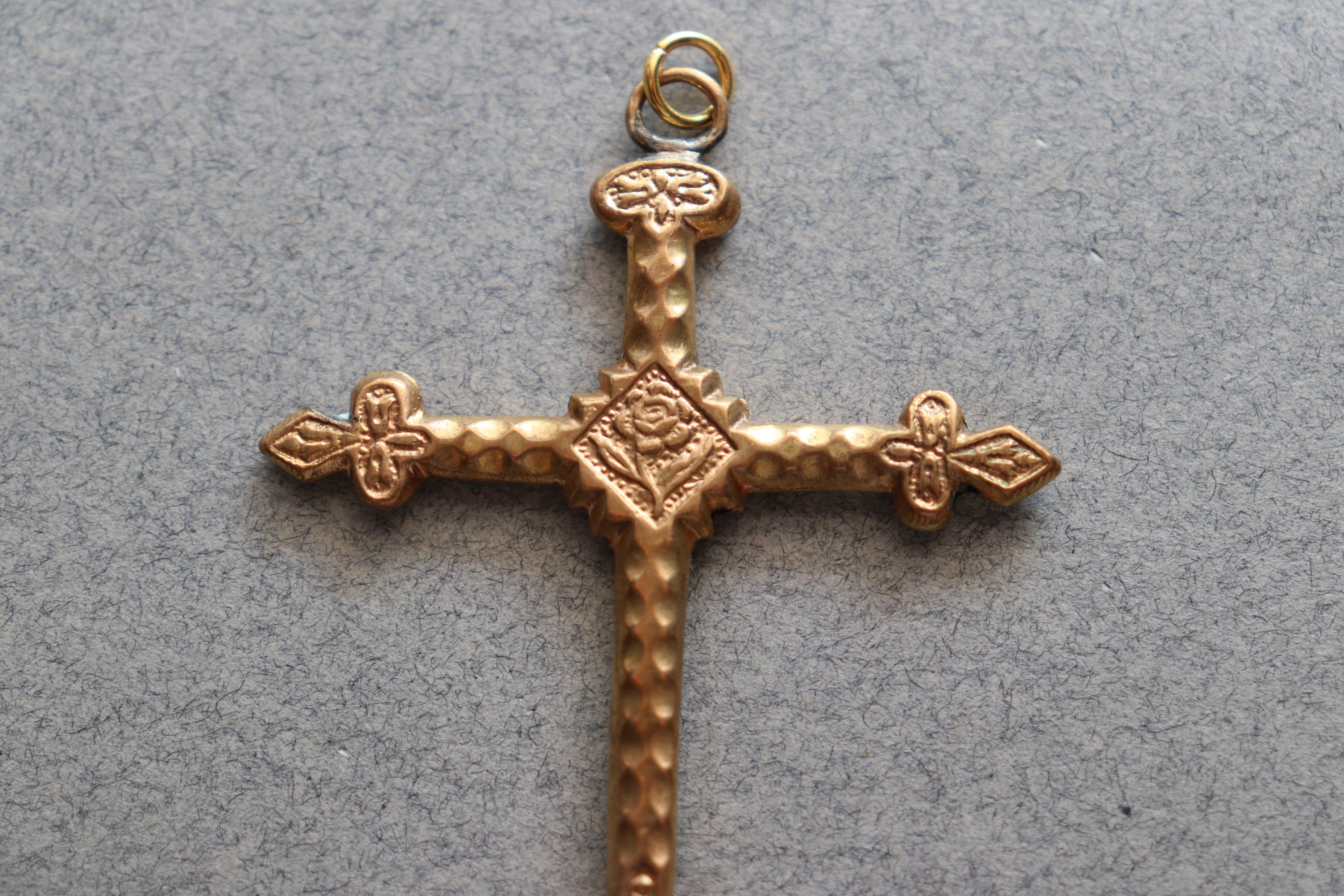 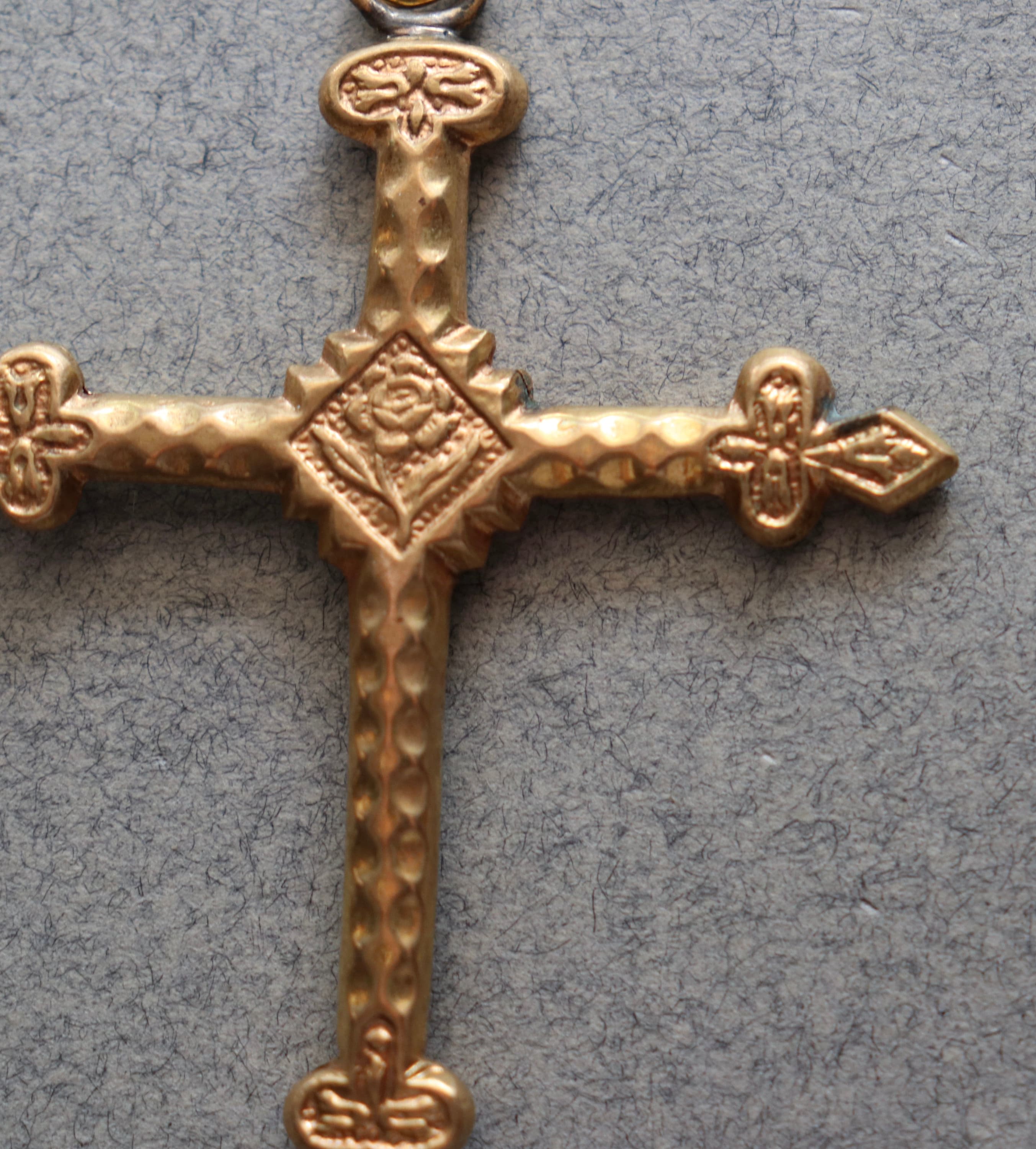 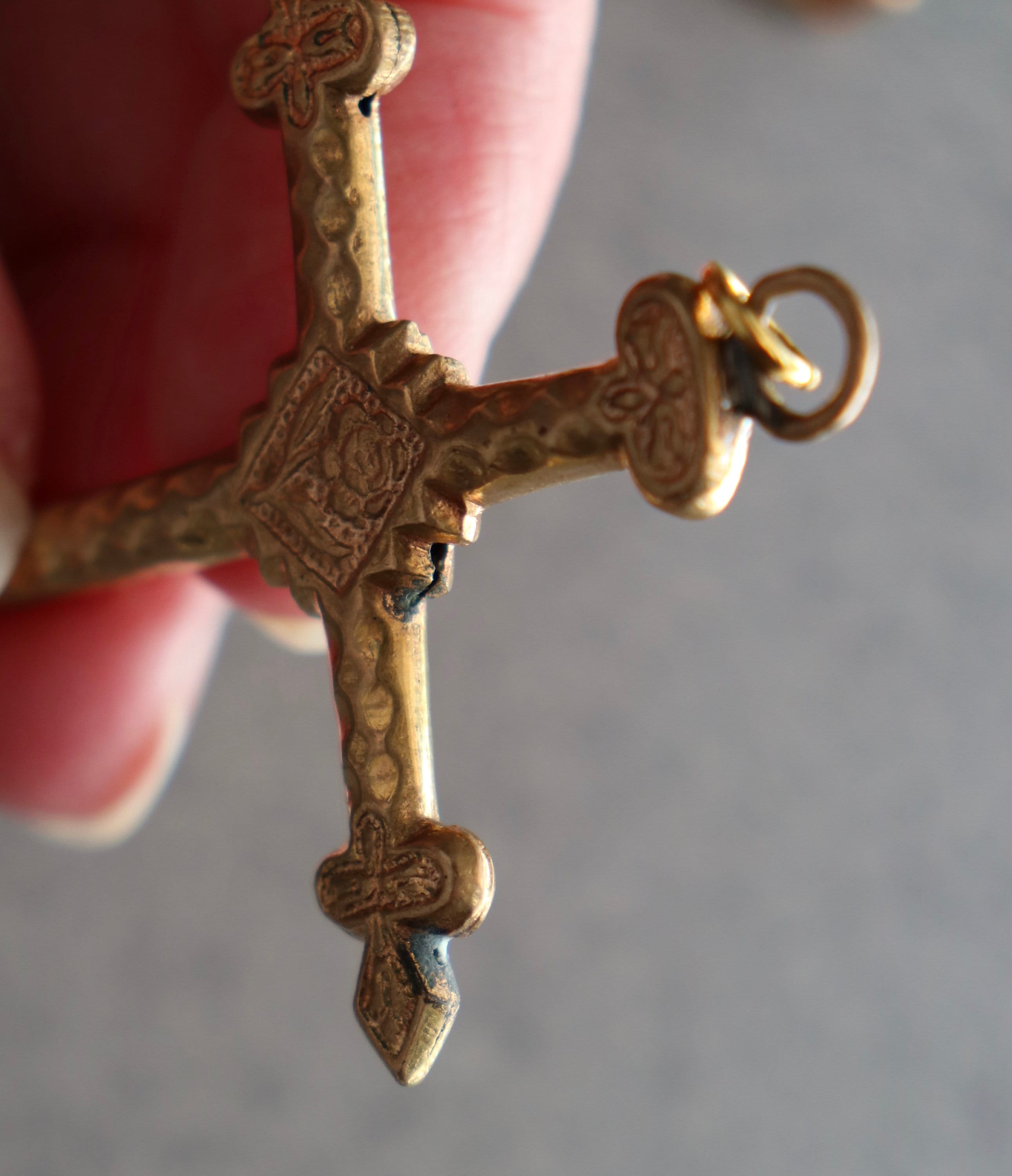 This antique, French, Jeanette cross is from the end of the 19th century and is comprised of two pieces of metal that appear to be soldered together. ****In fact, one can see openings and solder at certain areas of the cross. Please examine the photos and do let me know if you would like more as I'll be happy to oblige. The cross itself looks to be gold-plated, but I cannot be certain as there are no identifying marks.

The cross measures 2 ⅜" (including the stationary bale but not the attached jump ring) by 1 ⅞" and is from Paris, although the diamond shaped ends of this cross may point to a Savoy origin.

Thank you to http://www.bijouxregionaux.fr/en/contenu.php?idcontenu=45 for the information on the Jeanette cross.

According to the site, the Jeanette cross, often made in Paris, was worn throughout France, especially in regions that did not have their own unique cross. They were often of hollow, stamped gold, gold plated, or silver.

The site cites several examples proposing the origins of the Jeanette cross. They write:

"The play Jerome Pointu was played in 1781 by the actor Volanges with Miss Bisson in the role of Jeannette, the servant of the old prosecutor Jerome, and she appeared on the stage with a small gold cross worn on her neck tied with a black velvet ribbon. The Jeannette cross soon became the rage in all classes of society.

According to the Dictionnaire de l'Industrie et des arts industriels of 1881, "It was then that, around 1781, the jewelers obtained one of their greatest successes, when women, eager for novelties, hung small dolphins on their necks, a transparent allusion to the birth of the son of Louis XVI (known as the dauphin). In 1783 the dolphins were replaced by the Jeannette crosses. (3)
L'Observateur des Modes of 1826 gives another explanation of the origin of the name Jeannette cross. "These crosses were in vogue forty years ago, because of an actress who, under the name of Jeannette, shared with Jerome Pointu, (the actor Volanges), the favor of the public in Jerome Pointu, but this is not their origin: from time immemorial, the servants in our countryside wear gold crosses hanging from a black ribbon, and we call these crosses Jeannettes, because these crosses are what they give themselves or buy themselves on the fête of Saint-Jean, the date when their contracts are initiated or renewed." (1)

Jeannette crosses were often worn with a heart-shaped slide through which the ribbon was run and which allowed the height of the cross to be adjusted. After the crushing naval defeat by the English of the commander François Joseph Paul de Grasse in 1782, it was cynically said that the crosses certain women wore without slides were à de la Grasse, that is to say they were heartless.(2)

According to the magazine Le Corsaire of 1826, this year's fashion is for Jeannette crosses, "but very large."

The Dictionnaire de l’Académie Française of 1881 defines "Jeannette" as "a very young maid".

The Dictionnaire français illustré des mots et des choses from 1889 defines "Jeannette" as "a gold cross that ladies wore hanging on the neck by a velvet ribbon: The Norman peasants still wear Jeannettes tied by a very short ribbon."

And the Dictionnaire Universel des Sciences, des Lettres et des Arts of 1896 called the Jeannette a "gold cross sometimes surmounted by a heart, which peasant women wear suspended with a velvet ribbon, and which the ladies some time ago wore in their imitation". (Note the distinction between city "ladies" and women in the countryside)."