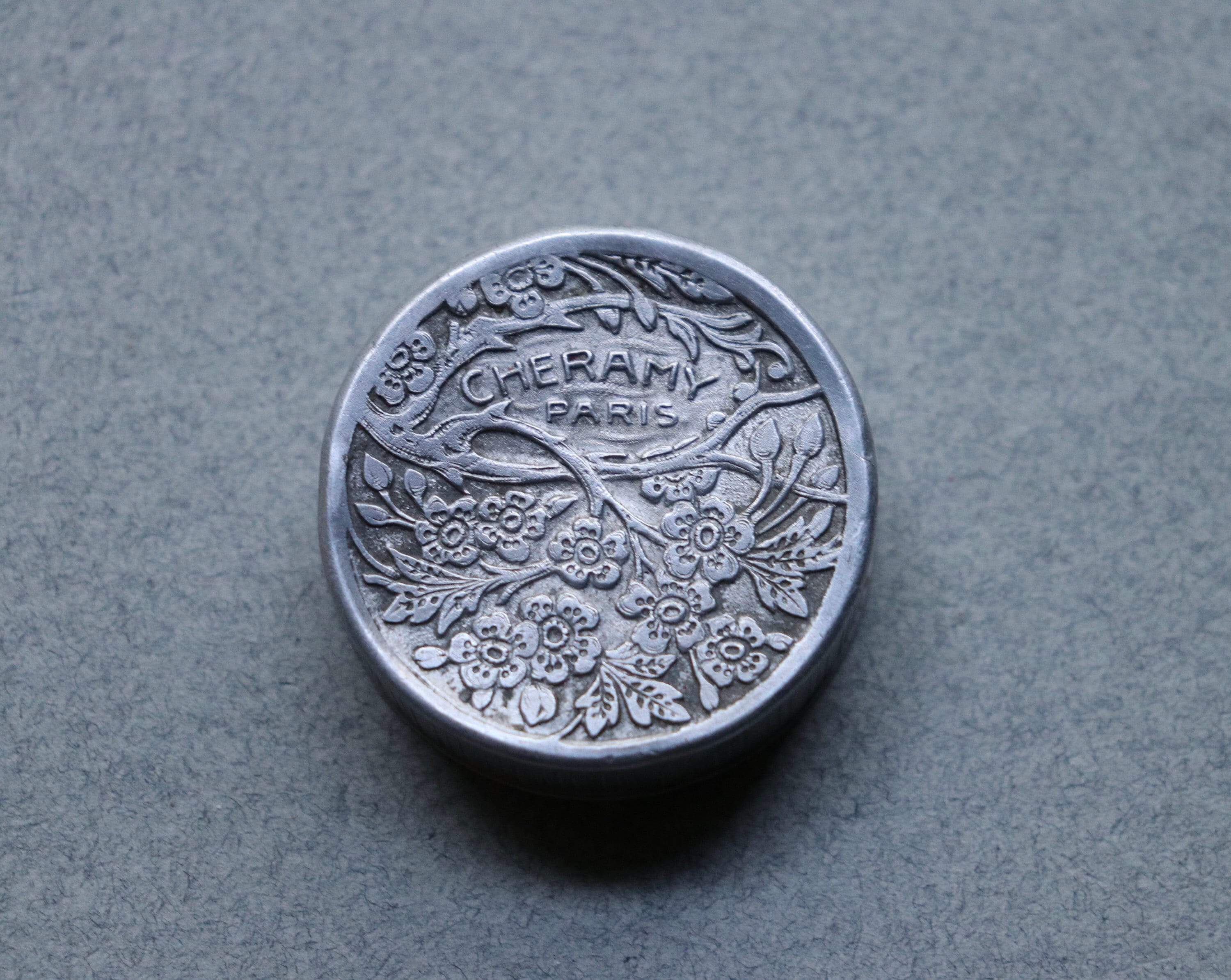 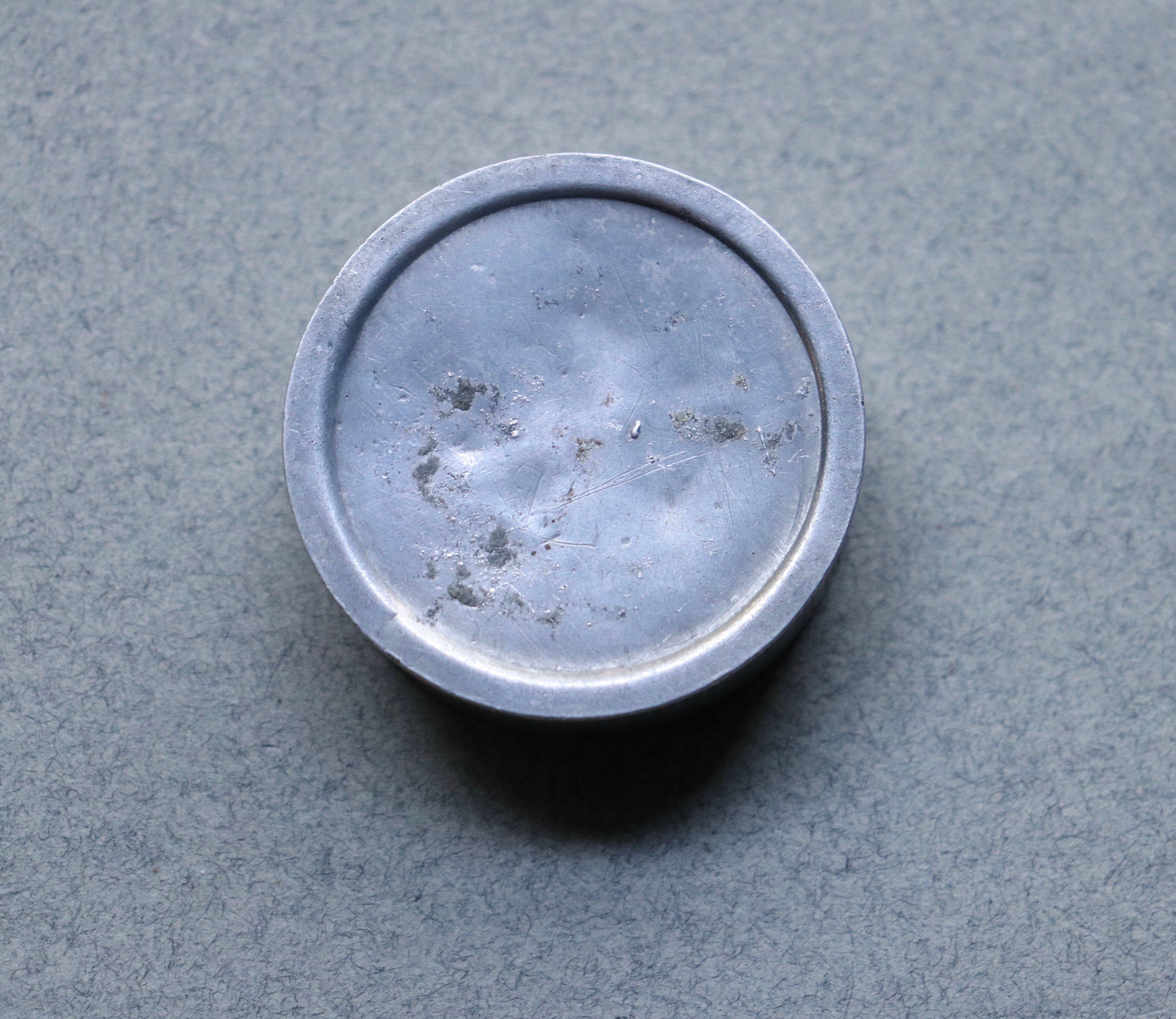 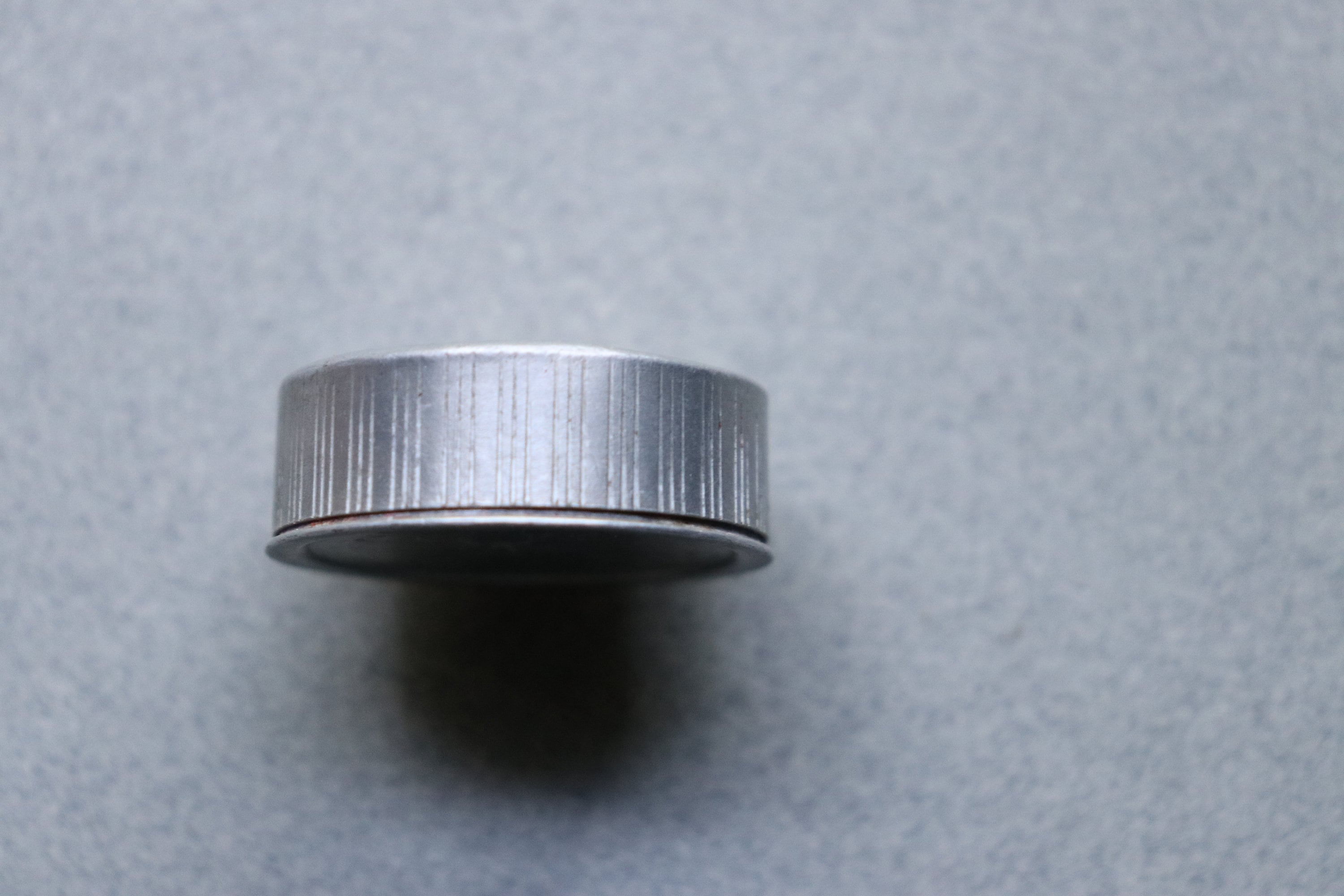 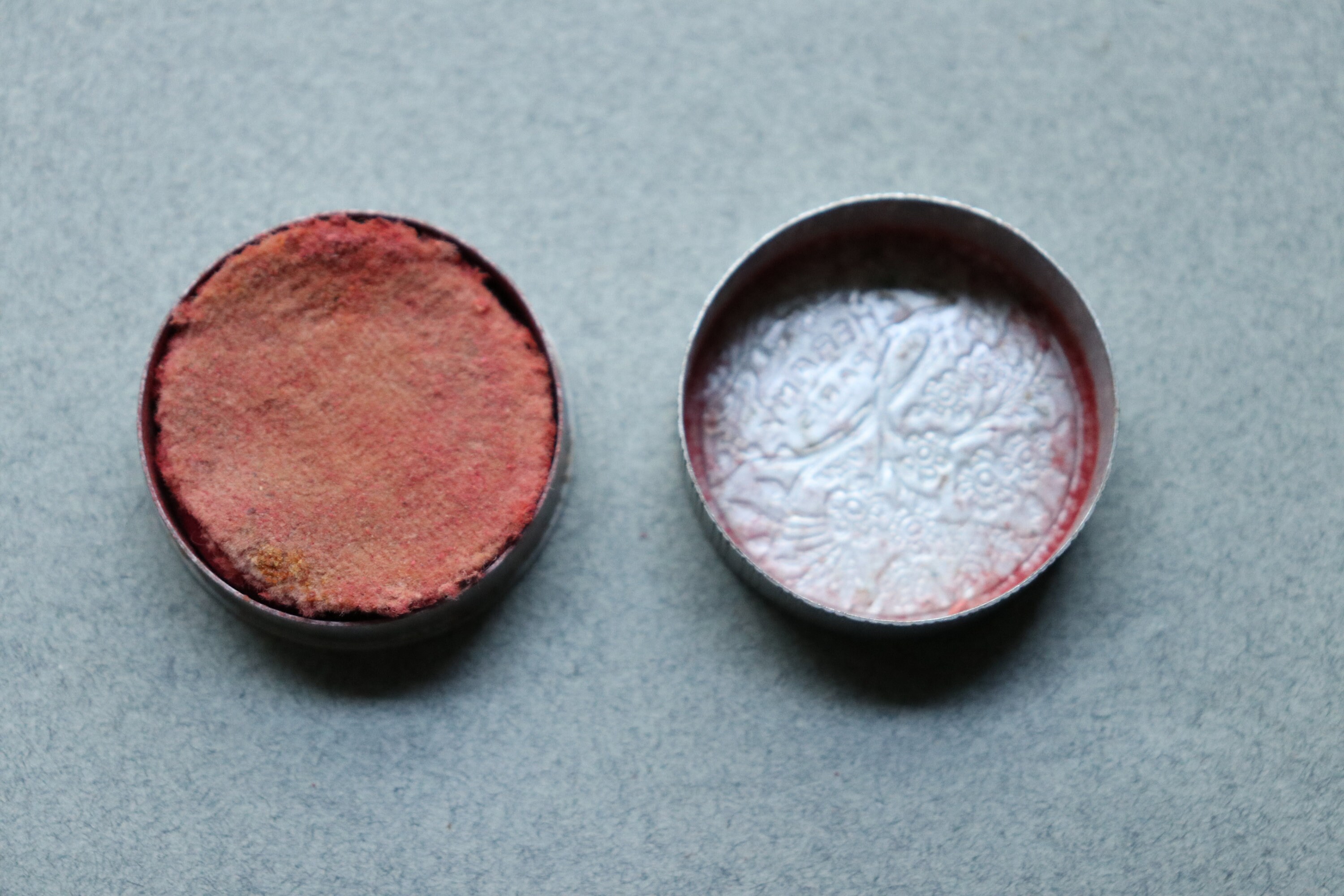 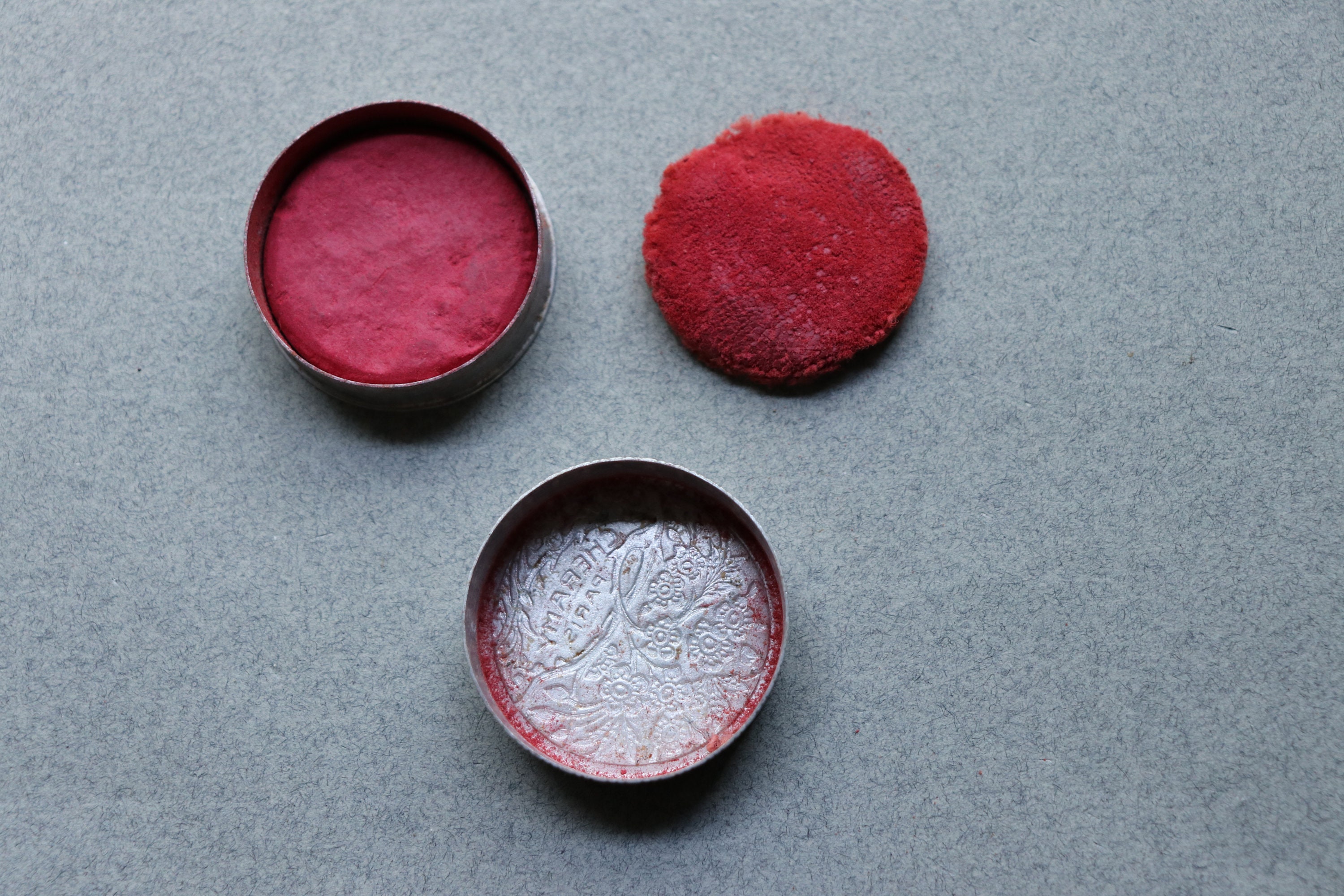 Cheramy, Aluminum Rouge Box, Made for the French Market, Rare

The history of Cheramy is long and interesting. Here is a link to an incredibly informative article: http://collectingvintagecompacts.blogspot.com/2011/05/cheramy-american-perfume-line-with.html

This rare, aluminum rouge box dates to circa 1927 and measures 1 ½" across with ½" depth. It contains the original rouge cake and puff. It was manufactured for the French market.

****CONDITION: There is a depression on the left side of the lid, most probably from repeated closure of the case. The underside has scratches, dings and wear. The edge of the box has wear in the form of scratches.

Many think Cheramy is a French company when it is, in fact, American. Some of their products, like this one, were made for the French market. An interesting bit from the above website:

Cheramy’s Paris shop opened in 1926 at 308 Rue St Honoré with the distinctive Cheramy logo prominently displayed in the shop entrance. The products sold from this shop were packaged slightly differently from those sold in America, especially the powder containers. Unlike America that favoured brass cases, France found aluminium cases were very acceptable to Frenchwomen and Cheramy was an early exponent of aluminium powder boxes. Most commonly seen is the square loose powder container with the repousse spray of flowers used for its ‘Lov-Lor’ powder. According to Laura Mueller the container decoration was designed by René Lalique but rarely is such a case marked with his name stamp. As well as the ‘Lov-Lor’ box, Cheramy used another range of aluminium powder boxes which bear a strong similarity to Frank Miles’ original design. These smaller round aluminium cases are very rare and their construction is also reminiscent of Roger & Gallet’s ‘Fleurs dÁmour’ powder box. At least two sizes of these boxes were available, 1 7/8” diameter and 1 7/16” diameter. Both have identical repousse designs with a distinctive flower display, albeit different from that normally seen with Cappi cases.