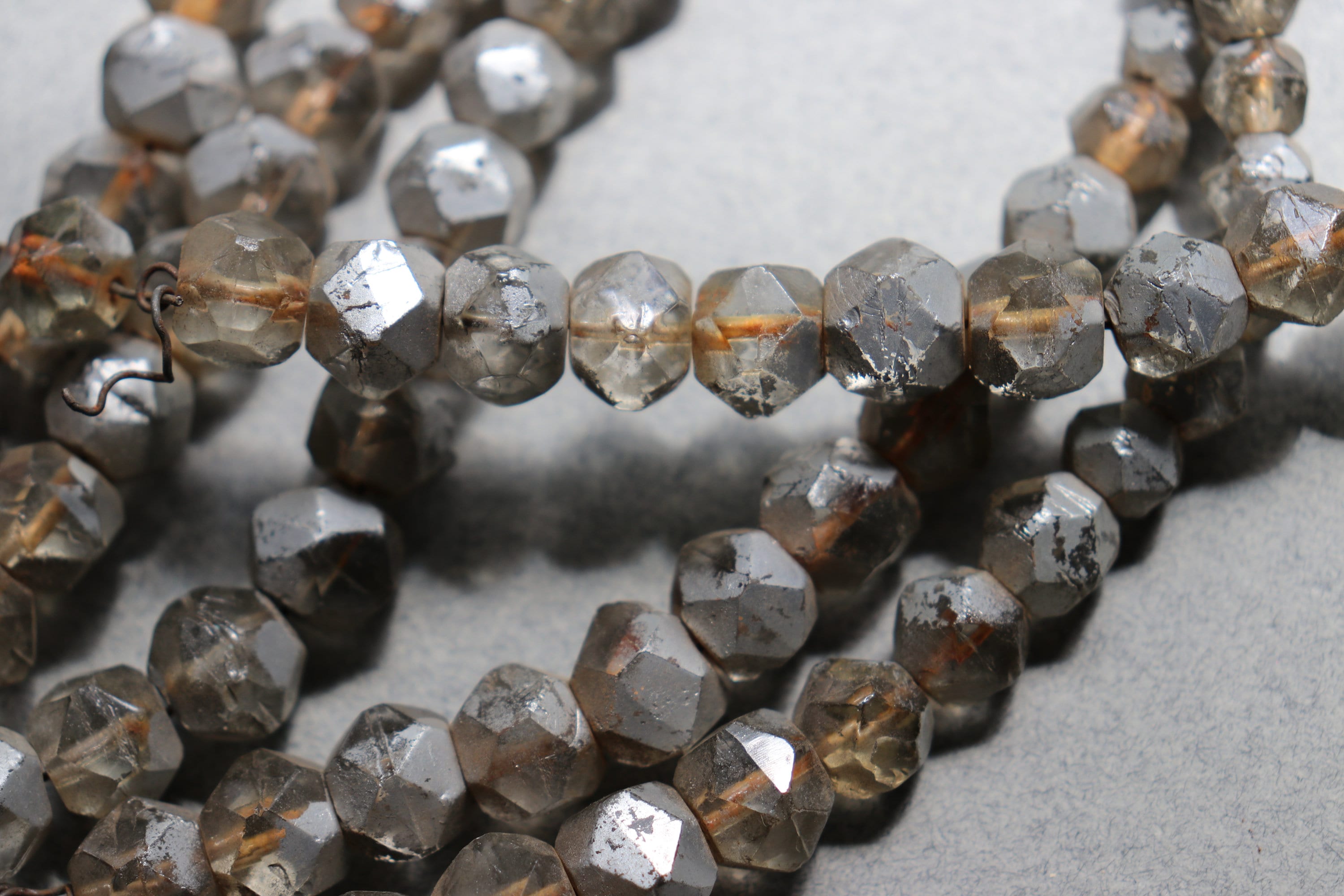 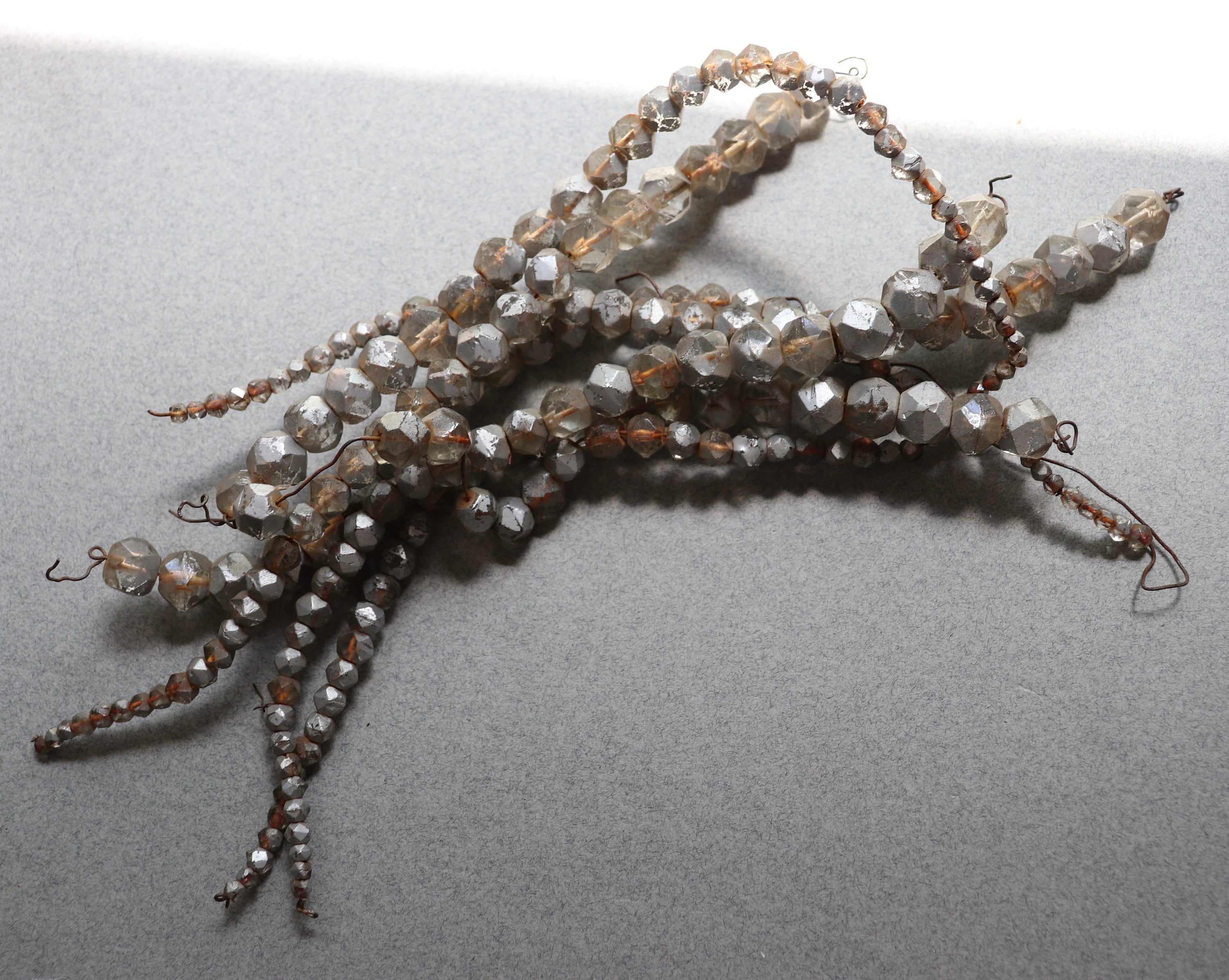 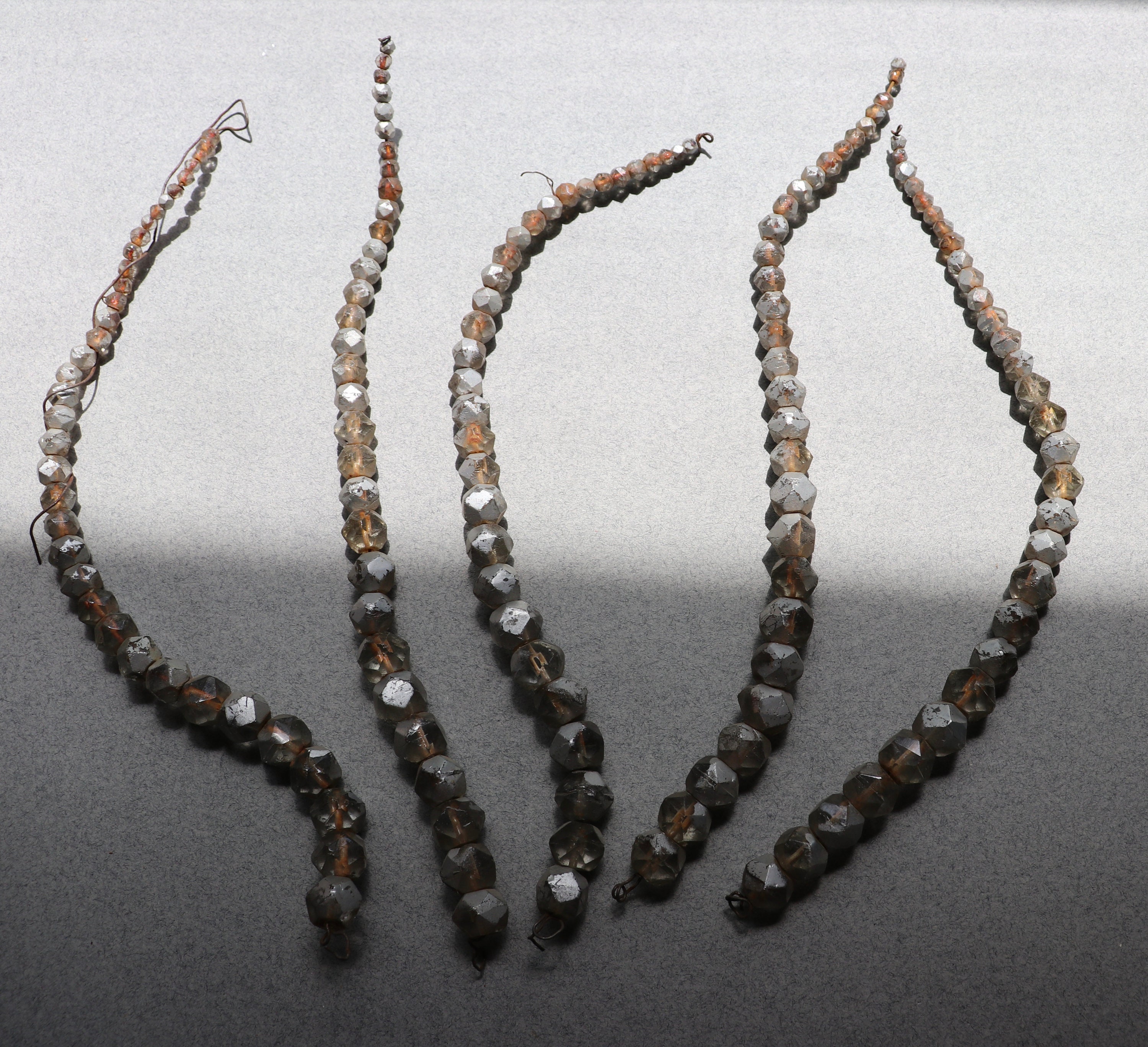 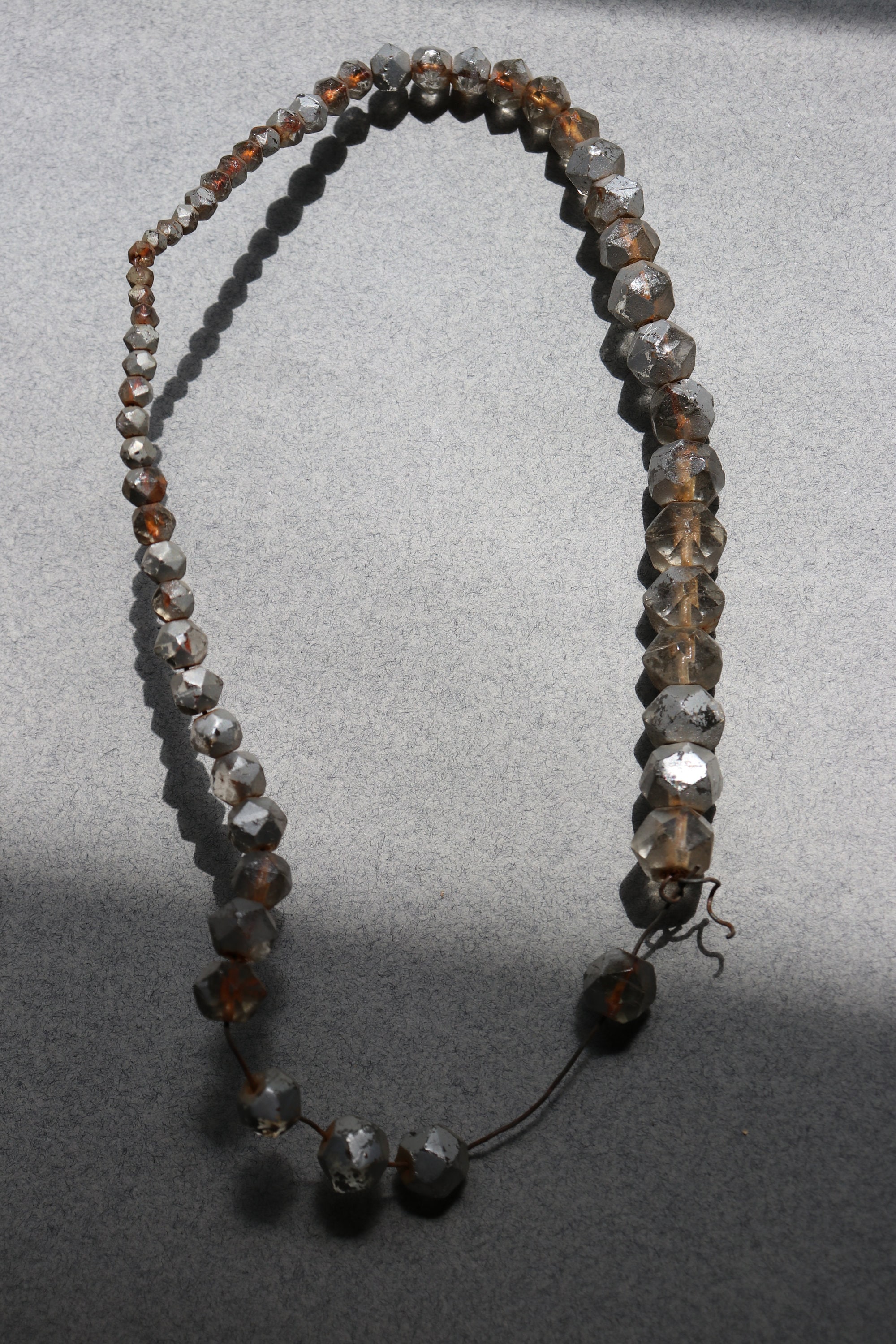 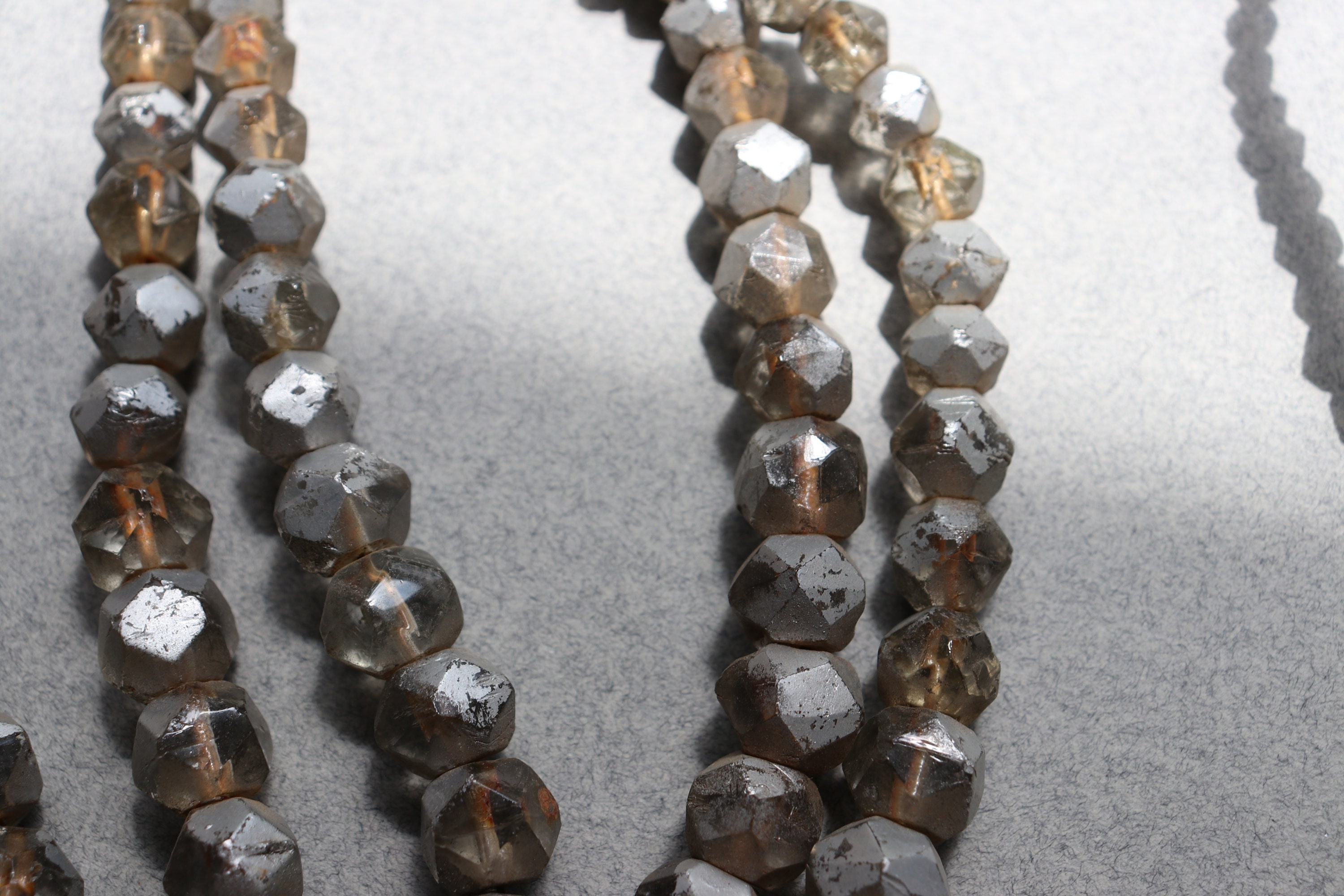 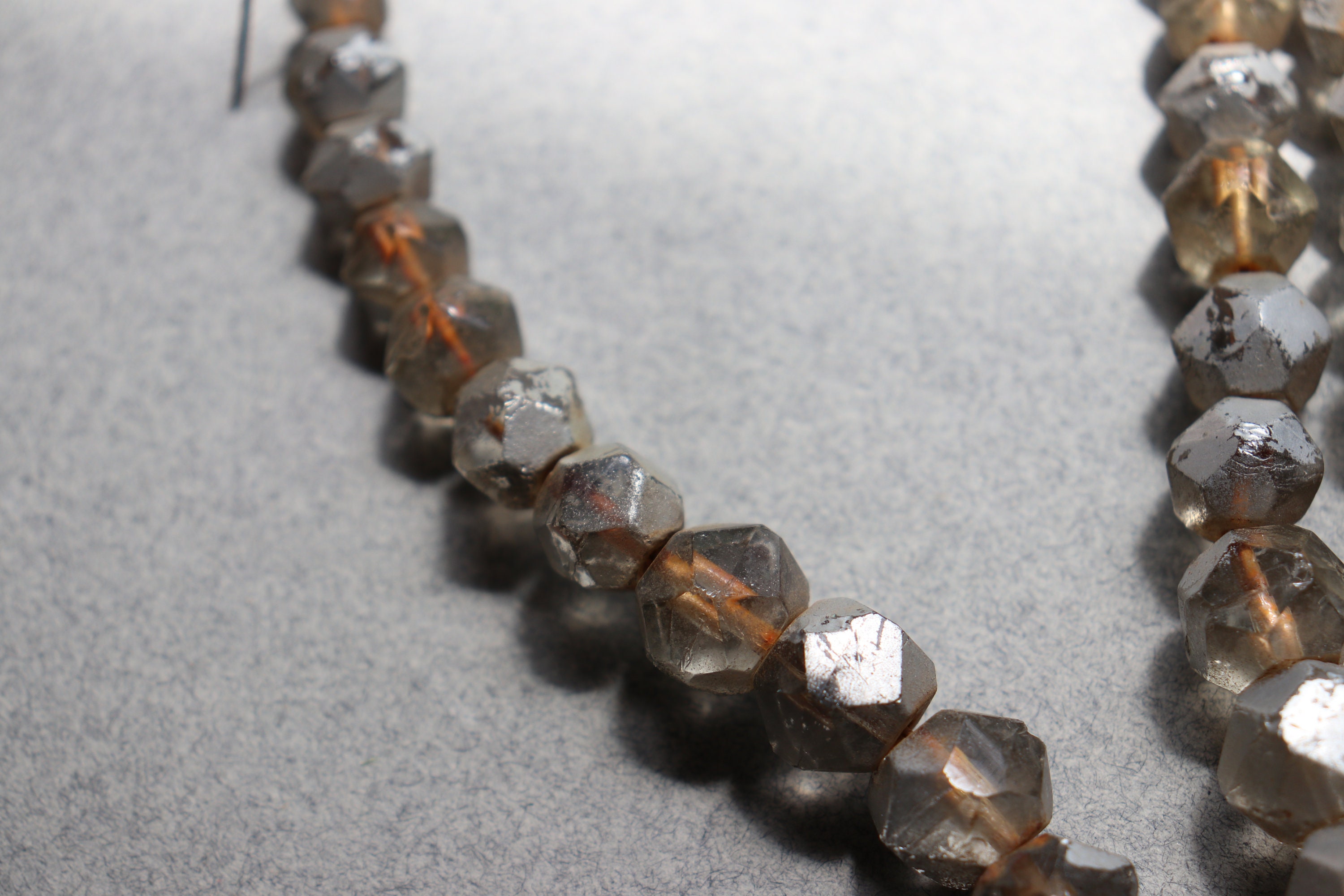 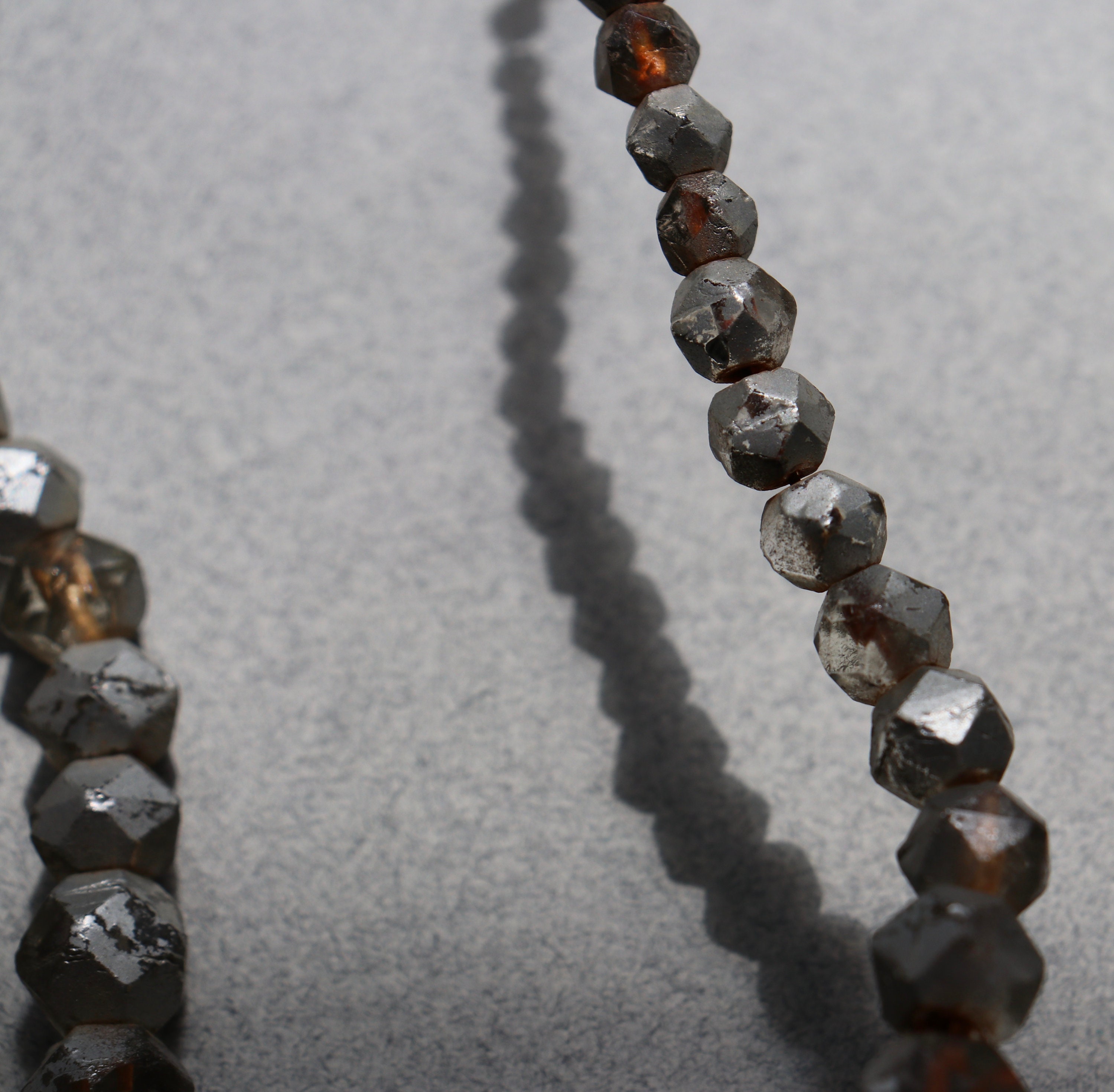 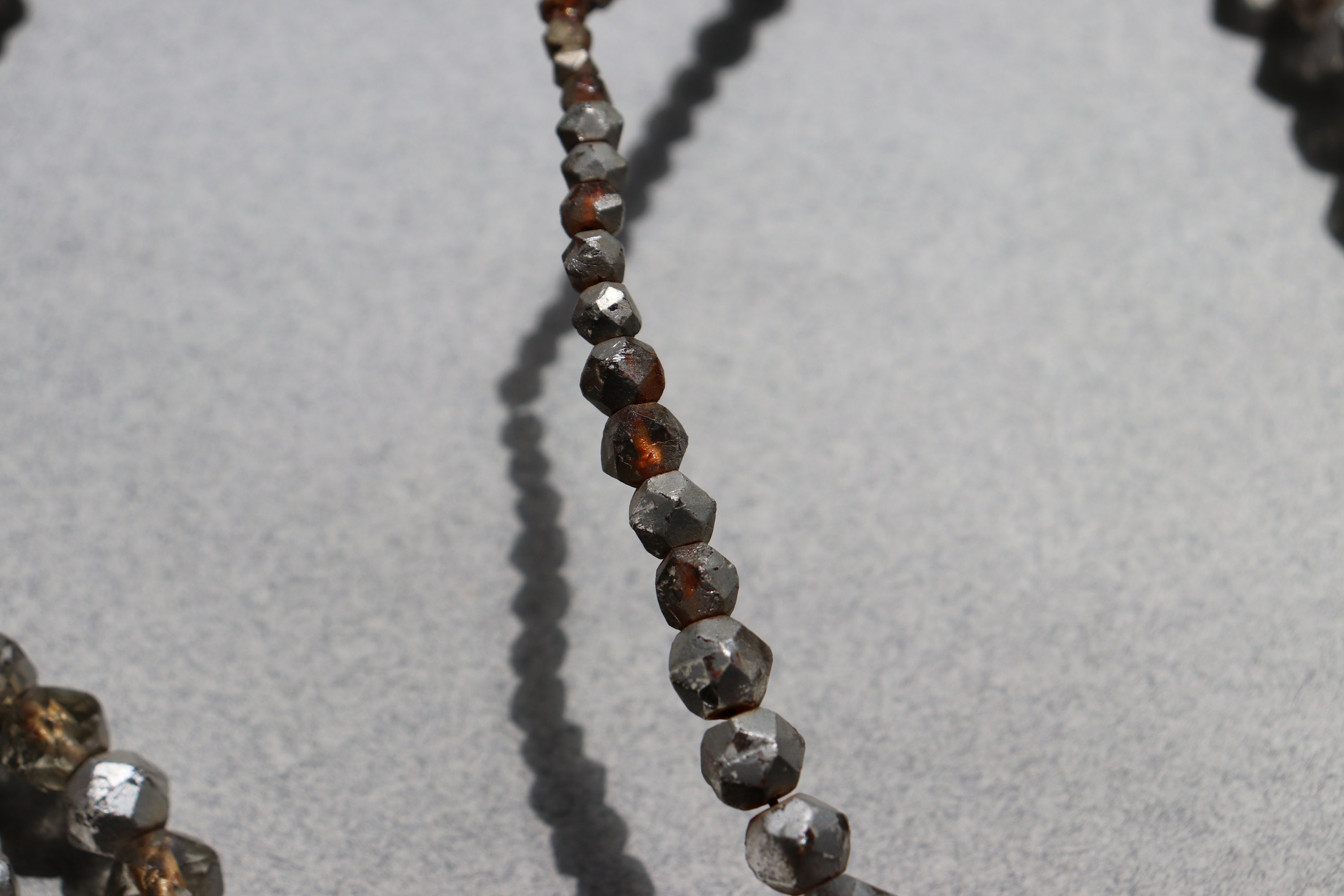 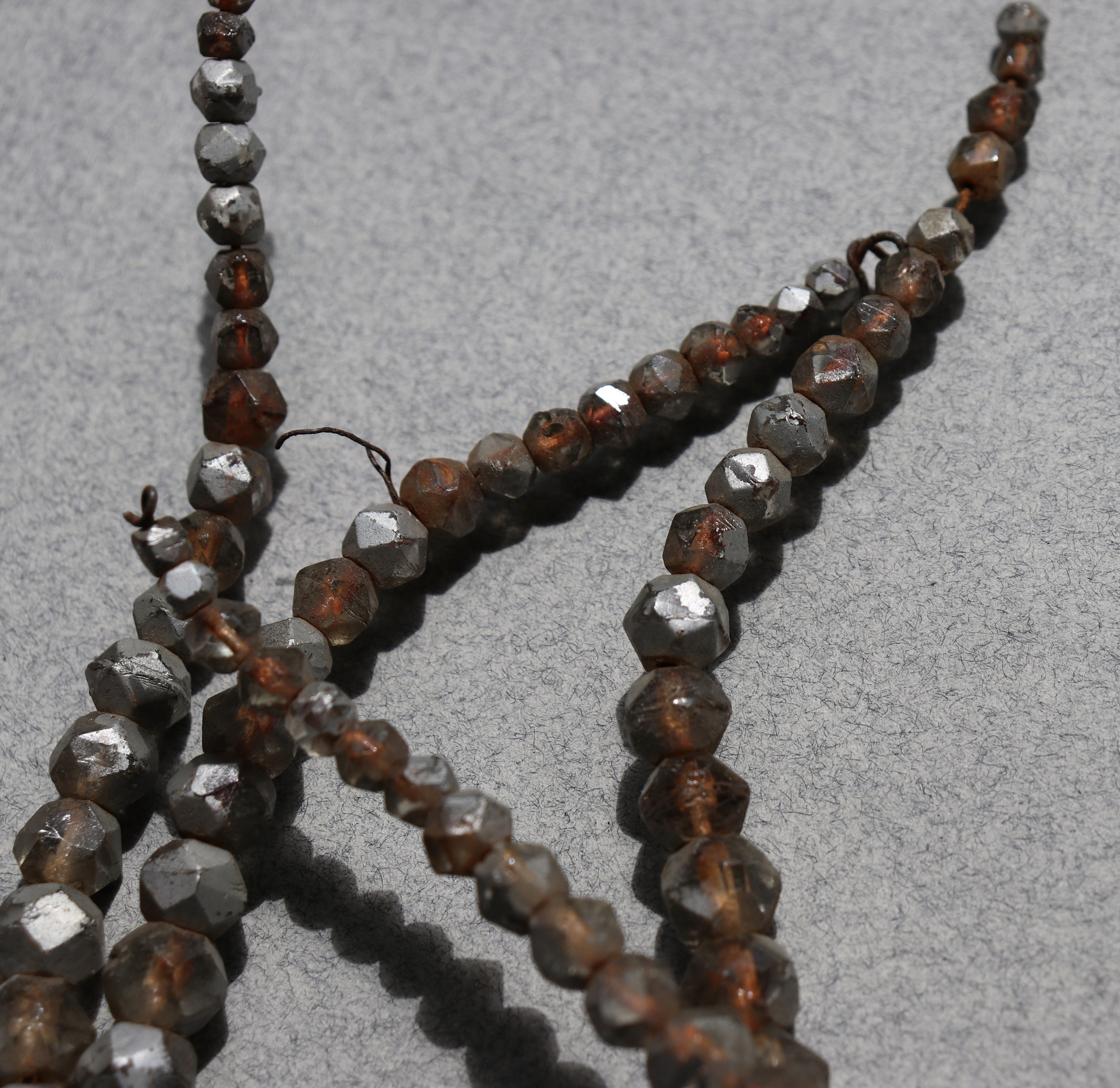 This sale is for all six strands of gradated mercury glass beads strung on wire. Please note that the beads have imperfections in the way of discoloration and wear to the surface of the glass. Some chips may be present, too. Please examine the photos closely and do let me know if you would like more photographs as I will be happy to oblige.

I am dating these conservatively as being circa 1930s.

Dimensions:
The connected piece measures 16" in total.
The other strands measure 9", 8 ¾", 10", 9", and 8 ¾". Please note these measurements are approximations since the wires are bent.

Thank you to https://www.homesandantiques.com/antiques/collecting-guides-antiques/the-history-of-mercury-glass-and-how-to-start-your-collection/ for the following information on mercury glass:

Made for show rather than practicality, mercury glass, ‘poor man’s silver’, or silvered glass as it is more accurately termed, usually has nothing to do with mercury, and varies in quality from skilfully made elegant works, to cheap reproductions you might find in a boot fair or brocante for a few pounds.

How is mercury glass made?

The metallic effect requires an intricate process. ‘It involves blowing a double-walled glass object, then filling the gap between the layers with silver-coloured metal. Usually this is made from a mixture of silver nitrate and glucose or grape juice, which helps the metal to adhere to the glass wall. Excess metal is then poured away and the gap sealed in some way. In England, a metal disc was often used; elsewhere you might find glass or even paper,’ explains glass expert Mark West.

The heyday for this type of glass came in the mid 19th century. ‘The technique was patented by Edward Varnish and Frederick Hale Thomson in 1849. Thomas Lund was another key maker of the time,’ says Mark. ‘These pieces were beautifully made from heavy lead glass, often elaborately decorated, sometimes with overlaid coloured glass cut back to reveal the silvery metal beneath, and they were typically sealed with metal discs that were signed.’ A display of mercury glass items at the 1851 Great Exhibition met with great acclaim and, for the next decade or so, fashionable well-to-do buyers proudly displayed silvered glass candlesticks, vases and bowls in their homes.

The fashion also took hold in Germany, Bohemia, France and Belgium. ‘German ones were roughly contemporary but slightly second division – they continued to be made for longer, so there are more around. America also produced silvered glass. A patent was registered in 1855 and silvered glass was exhibited in America at the New Crystal Palace exhibition by the New England Glass Company.’

But as the century progressed quality began to wain. ‘Numerous small French factories made mercury glass in vast quantities but very inferior quality. Candlesticks, Madonnas, vases, handles and doorknobs were produced for sale in fairgrounds and less exclusive shops. This type of glass is much lighter in weight when you handle it. The seals were normally just made from paper and have usually disappeared. As a result, the metal inside has nearly always deteriorated badly from exposure to a damp atmosphere and looks mottled. ‘They’re not just distressed, they’re abandoned!’ says Mark. ‘Compared with English mercury glass, French items are far less desirable. They don’t have the same aesthetic appeal or technical skill, although if you like the distressed look, displayed in a group they do look attractive.’